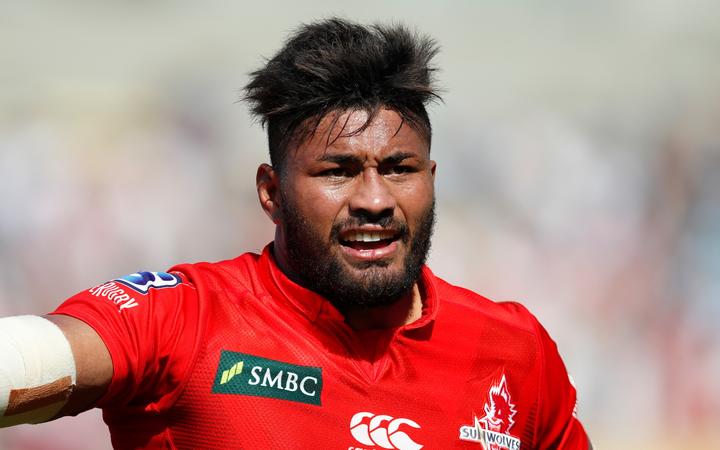 Amanaki Mafi playing for the Sunwolves in Tokyo in May. Photo: Photosport

The 29-year-old is charged with injuring with intent to injure his then Melbourne Rebels teammate Lopeti Timani in Dunedin in July last year, following the team's season-ending loss to the Highlanders.

The charge carries a maximum penalty of five years' jail.

Mafi was again excused from appearing in Dunedin District Court, where Judge Michael Crosbie set a trial date of 27 January.

The player pleaded not guilty in September last year, and has not appeared in court since his first appearance following his arrest in July last year.

Mafi lives in Japan and Timani is understood to reside in France. Both were fined $A15,000 by the Rebels following the incident for breaching team protocols. The pair were drinking at a South Dunedin address early on 15 July 2018 following the loss to the Highlanders which ended the Rebels' finals hopes.

The trial's scheduling appears to clear the way for Mafi to play in Rugby World Cup which starts next month in Japan.

Setting the trial for the first week of trial dates in the new year, Judge Crosbie noted in court today it would not clash with "a rugby season - the World Cup is over".

Mafi is to appear before the court on 21 January - the week before his trial - to answer bail.

The trial is expected to last three to four days.

The Japanese Rugby Football Union has previously said it would not make any determinations about Mafi's playing future until the charges were dealt with in court.

Mafi started at number eight for Japan in their recent Pacific Nations Cup matches against Fiji and Tonga.