Auckland's firefighters have been responding to scores of emergency calls for a small tornado and strong winds that lifted roofs overnight, including The Cloud events centre on Auckland's Queens Wharf and a preschool. 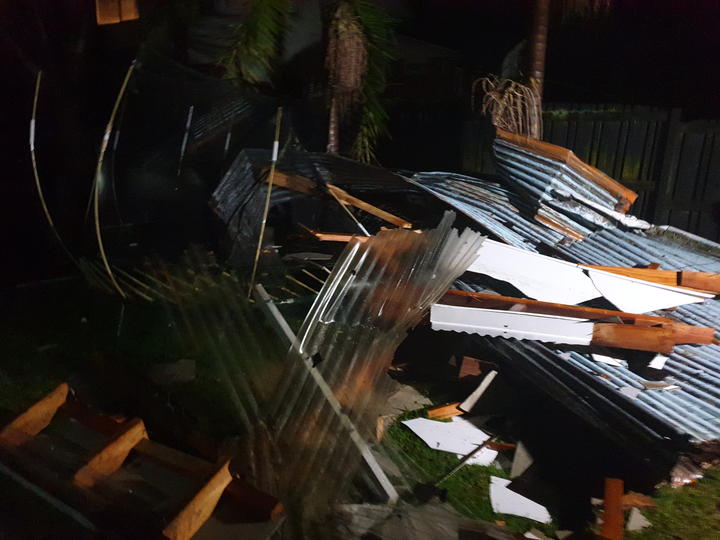 Residents of the Auckland suburb of St Heliers are in shock and one family is homeless after a violent tornado ripped through a residential block.

Roofs were ripped off, fences pulled apart and large trees brought down in what residents describe as about five seconds of terror and chaos.

Ashby Ave resident Craig Hawkins told RNZ he and his sons were watching TV when the storm began hurling corrugated iron, vegetation and other debris into their house and back yard.

"The rain just started, and then there was this almighty bang, and then the roof blew off, and the doors blew in, and we were all of a sudden totally exposed to this weather. It was amazing, it was so loud.

"The next door neighbour's roof was splattered all over our place, power lines everywhere, trees gone, smashed windows. Yeah - it's a disaster."

The house is unsafe for the family to stay in, and they had to find emergency accomodation overnight. 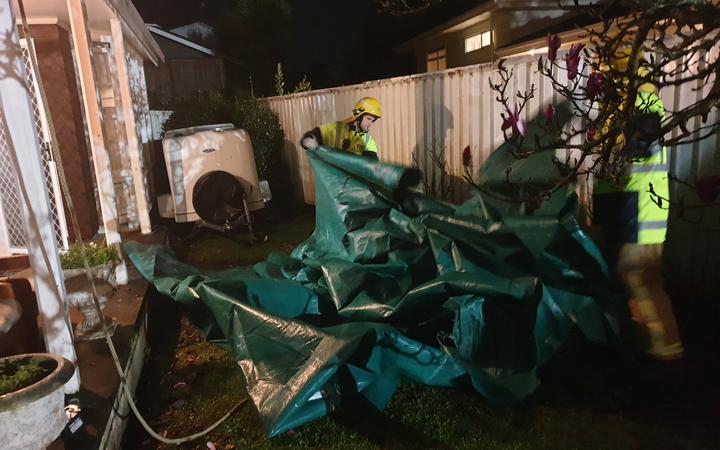 At least one other house was severely damaged and a dozen or more were damaged in the brief but violent tornado that cut a path through two or three streets as people were getting ready for bed.

"[It] blew the door open, smashed the door-stop through the wall, a tree ripped down outside, and a tree ripped down in the front. The power lines are down, our neighbour's roof came off - they've had to go to a hotel and their electricity's out.

"Another neighbour's roof is off. It was incredible - it was just - I couldn't believe it."

Late on Sunday night the roof was lifting on The Cloud events centre on Auckland's Queens Wharf, amid squally weather and thunderstorms.

Fire and Emergency said it had responded to about 20 weather-related callouts from the South Waikato to Auckland.

Fire and Emergency shift manager Daniel Nicholson said the bulk of callouts were in St Heliers, and there were a dozen reports of damage.

"We're currently in attendance in a nursery in St Heliers, with their roof that's been lifted due to the wind."

Mr Nicholson says firefighters have helped as much as possible, but some owners will have to organise their fix with insurance.

He said the roof on The Cloud on Queens Wharf was being secured by on-site security. 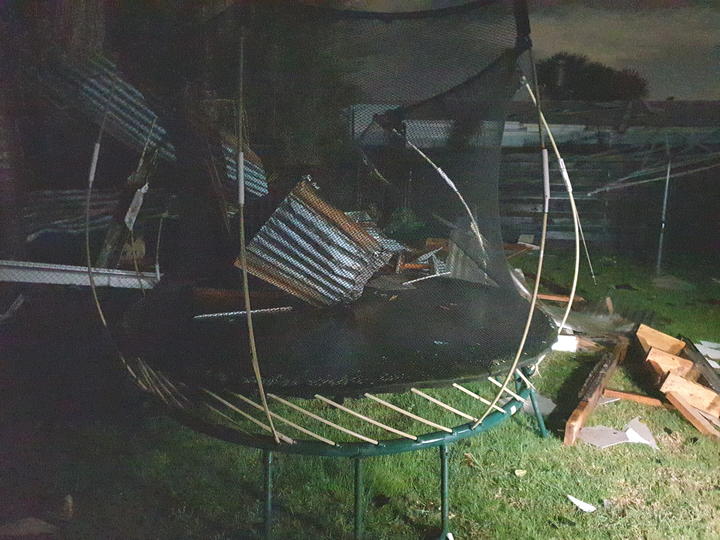 Damage in St Heliers caused by strong winds during the storm. Photo: RNZ

Mr Nicholson says firefighters have found no damage on a house struck by lightning in Kumeu, and deemed it safe to re-enter.

He said people should stay indoors if possible as the wild weather continues.

MetService said the thunderstorms could bring wind gusts of 110 kilometres an hour or stronger.

It said in a tweet there had been about 50 lightning strikes in the Auckland region between 8pm and 9pm on Sunday.

Meanwhile, thousands of lightning strikes lit up night skies across the top of the North Island, between Taupō and Northland.

Over 700 lightning strikes ⚡️ in the past hour! pic.twitter.com/G3kHCCoR5i

MetService's thunderstorm watch for Auckland, Northland and the Bay of Plenty was in force until midnight Sunday. A "moderate risk" of thunderstorms remains through Monday morning for the west of the North Island from Auckland to Kapiti, parts of the Marlborough Sounds, Nelson and Buller.

Late on Sunday night forecaster Allister Gorman said the worst of the storms had passed over Auckland, Northland and the Waikato, and would soon hit Bay of Plenty and northern Hawke's Bay.

"This afternoon and evening we've had almost 2000 lightning strikes over the country, from the northern part of the South Island and over the North Island. This evening with the stuff through Auckland there was about 50 strikes recorded over the Auckland area."

Mr Gorman said the thunderstorms will remain for a few more hours, and will be followed by a few more days of bad or unsettled weather.

Residents in Paeroa copped an intense but brief version of Sunday night storm, with one saying the thunder was the loudest he'd ever heard.

There was an unconfirmed report of a tornado in the area.

Local councillor Paul Milner said there was quite severe thunder and lightning - the loudest he'd ever heard - along with heavy wind and rain, which lasted about ten minutes.

Another councillor, Carole Daley, said there was a very loud clap of thunder that scared everybody around her.

Neither of them had heard of a tornado in the area.