Some historians are concerned New Zealand's public libraries and museums are being priced out of buying national treasures by private investors snapping up items from the country's early history.

A quiet Auckland suburb may not seem like an obvious home for a collection of rare treasures from New Zealand's early history, but in one house they are part of the furniture.

Private collector Spencer Scoular keeps carefully preserved books and documents dating back to the early 1800s in his home, and lends others to museums. He started collecting 10 years ago and recently outbid museums and institutions at an auction for a prized copy of a corrected printing of a Treaty of Waitangi proclamation of sovereignty and handwritten letter, for $31,000.

"I was very keen to get one of these proclamations so I actually did research into which libraries and institutions already had copies so I'd know if they were likely to compete. That gave me a feel for which items to bid for," Dr Scoular said.

Dr Scoular bought the document at auction house Art and Object's sale last month of an extensive collection of books, manuscripts and letters from New Zealand's early history for a total $563,000. 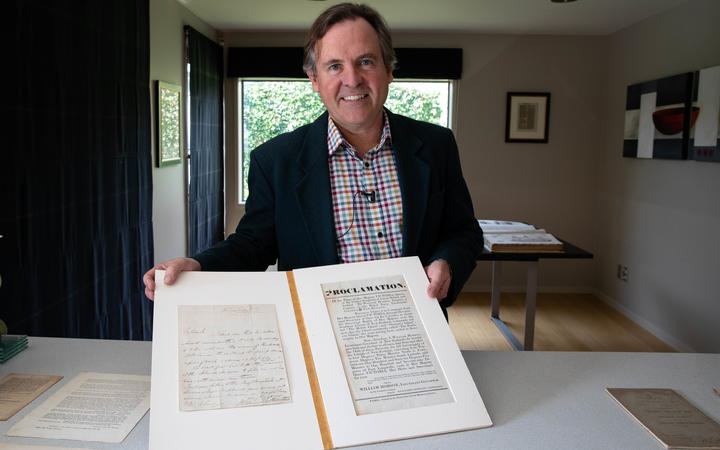 Spencer Scoular with the Treaty proclamation and handwritten letter he paid $31,000 for. Photo: RNZ / Dan Cook

Called the Christopher Parr Collection, it has been described as a "mouth-watering" part of the country's biblio history.

The sale flushed out 10 institutions but they snapped up only 75 of the 300 items. The rest went to private buyers, including Dr Scoular, who outbid the Alexander Turnbull Library for the proclamation and accompanying letter.

Public institutions have always come up against private collectors at auction houses but this recent loss has called into question the depth of the public purse. Although some national treasures cannot be taken out of the country, not all private collectors choose to share their treasures, and it could be decades before an item resurfaces into the public domain. 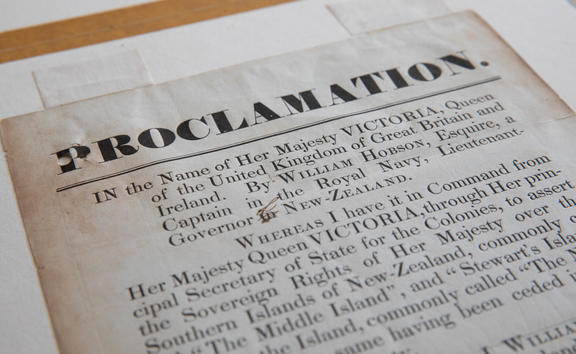 "Private collectors can drive prices up, as we saw for the recent auction where the price was driven up to over $30,000, and the library was no longer able to compete with the private purchaser."

Dr Parkinson is among a small group of experts who recognise by sight the handwriting of New Zealand's forefathers. A former librarian at the Alexander Turnbull Library, he said the handwritten letter bought by Dr Scoular was one of some key documents missing from the library's extensive collection of printed material by William Colenso, the government's defacto printer in the 1800s.

The Alexander Turnbull Library is a division of the National Library of New Zealand and its collections are housed in Wellington.

"You need to have all the evidence available. If you are missing a vital piece of evidence then the story can never be completed. The struggle of the library over the period since nearly 1950, the library has been trying to make sure that all of these documents which originally were together are restored to their correct place so that they can be worked on together. That has been a process which has gone through about five chief librarians over a period of about 60 years."

Dr Parkinson said it was disappointing to miss out on items that would complete collections.

"It's almost inevitable, it's annoying of course when a thing which you really need to complete a set has strayed but sometimes we can retrieve the information without great loss because the text has been transcribed previously, or it has been photographed so you still have the information even though you don't have the physical item any more," he said.

"It's because of little things like watermarks and handwriting that we can establish the exact provenance of documents."

He would like to see the original handwritten letter housed with the Alexander Turnbull Library, and said private collectors and libraries can co-exist.

The government can requisition items under the Protected Objects Act (1975), although the Ministry for Culture and Heritage said it has only twice actively brought an item back into public ownership - in 2011 a watch collection owned by the late Sir Edmund Hillary was returned to New Zealand and in 2009 a fake korere was brought back from Australia and now resides at Te Papapa Tongarewa.

Are the pockets of private collectors too deep for institutions to compete with?

The collections are based on Alexander Turnbull's private collection of books, manuscripts, photographs, paintings and sketches, and have grown since the library opened its doors in 1920.

Its chief librarian, Chris Szekely, said in a statement that public institutions always face potential competition from private bidders who could be motivated to buy items for personal or investment reasons.

"New Zealand public institutions are generally motivated by the belief that there is value in certain items being in public ownership so they can be accessible to New Zealanders. In our case, we bid for items that we believe have significant research value and address gaps in our collections," he said.

"It is not unusual for public institutions to be outbid by private bidders of significant means. Our bids are based on prior research into current market value, and what we believe to be fair and reasonable prices."

Dr Scoular said he did not expect to outbid the Alexander Turnbull Library. While some private collectors keep their treasures away from public eyes, Dr Scoular is keen to lend the letter and proclamation to a museum.

Not all collectors share their treasures with the public. 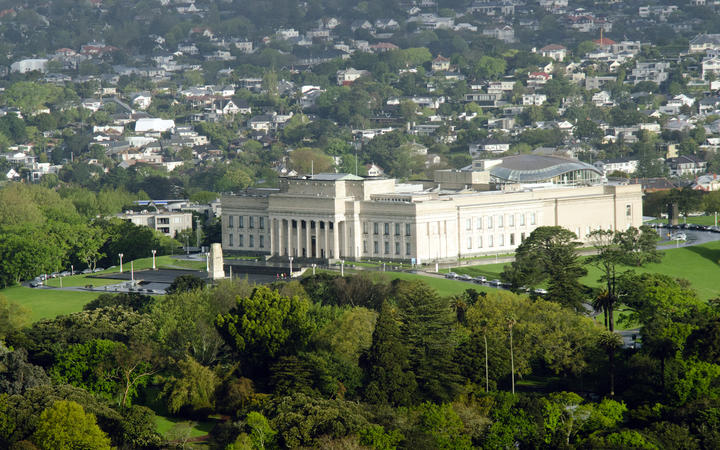 Auckland War Memorial Museum is home to collections of millions of taonga. It was among the institutions bidding on items at the Christopher Parr Collection auction and its director of collections and research, David Reeves, said they did not expect to win everything they bid for at auctions.

The museum won four of the 13 lots it bid on at the Christopher Parr Collection auction.

"Professionally it's sometimes disappointing but also it's a reality that the landscape is a mixture of public and private collectors and sometimes the cookie crumbles a different way, that's just how it goes," Dr Reeves said.

"The fact something is purchased by a private collector doesn't necessarily mean that it disappears for good. Of course, the professional interests of curators are that they work here because they enjoy sharing collections with the public and their hope is they'll be able to bring those collections to light."

"Museums will never be able to acquire and hold everything, it's not a realistic aim. I think what we can do is get better at building our relationships with the private collectors so that jointly we are the custodians of this material for coming generations." 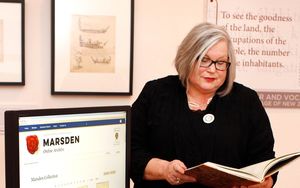 Curating a collection is a long game that Dunedin's Hocken Collections' librarian Sharon Dell knows well. During more than 40 years in the profession, she has seen material bought by private collectors come back into the market.

When she worked for another public library at the beginning of her career, Christopher Parr outbid her for an item that she saw up for sale again in June.

"When you're thinking of the price you have to think about the reasonably limited amount of money you have to spend and what is the comparative value between what you might pay for one small printed sheet and what that might buy you in terms of an archives collection or a work of art or some other material," said Ms Dell.

She said seeing an item go to private rather than public hands could be a let-down.

"Of course there's an initial disappointment but the private domain doesn't mean it completely disappears. The thing about private collectors is that their interests change and we have experienced really generous donations from private collections, or they come up on the market again. You have to take a long view."

The Hocken's collections include archives, books, drawings, journals, maps, music and film, newspapers, paintings, photographs and posters, dating from the seventeenth century to the present day. It bought five of the 15 items it bid on at the Christopher Parr Collection auction.

"Our experience has been that with some of this early printed material the prices haven't been that high in recent years, so we were surprised how high some of the material went for and it went beyond what we either had or would need to pay." 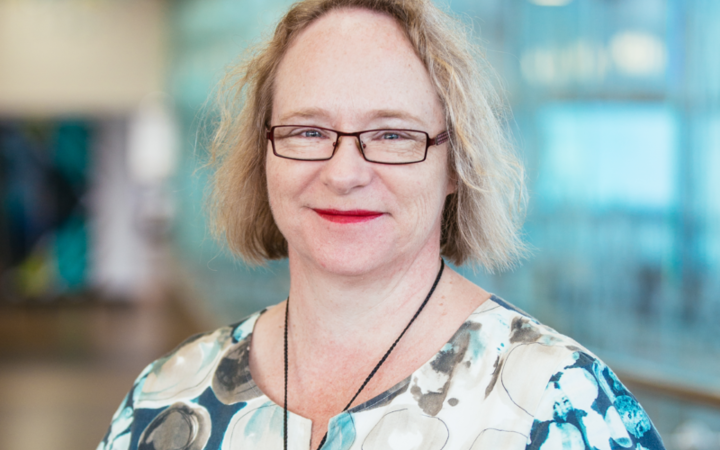 The library's head of research and heritage, Louise LaHatte, said Mr Parr contributed his knowledge and expertise to the trust, helping to ensure it acquired items it needed for the Sir George Grey Special Collections.

She said the library lost only one of the 33 items it bid on at the auction of Mr Parr's collection, spending a total $18,500. The library's annual budget for acquiring items for its heritage collection was $115,000 but Ms LaHatte said most of its new material came from donations.

"We have benefited from private collectors because we've had significant instances where those collectors have either left their collections to us or donated individual items."

She said it was important not to forget many of the country's national collections were founded by private donors - Auckland Library's heritage collection started with a gift from Sir George, who collected material in the 1800s. 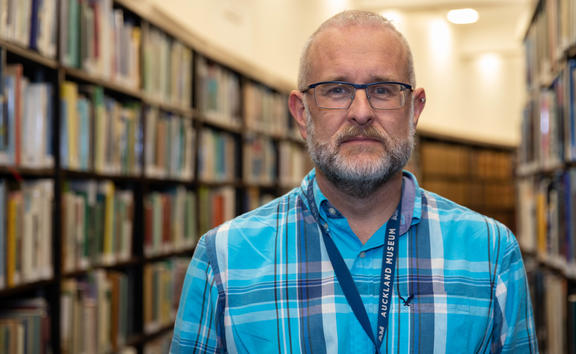 "New Zealand is such a small country that people who are interested in collecting, it's a fairly small pool, and so they are often also supporting the public institutions for their own research so we don't have any concern about competition."

It was unusual for 10 institutions to turn up to one auction, and Auckland Museum's David Reeves said they each had a good idea of what the other was seeking to buy.

"Over time we've got to know each other better and better and we take care not to overlap too much because ultimately these things are all cared for by public organisations and there's only so much money to go around so it's responsible for us to make sure we're in touch with each other and are collecting in complementary areas without too much duplication."