Social issues reporter Sarah Robson looks at the major changes and the facts under debate in the reform of abortion laws. 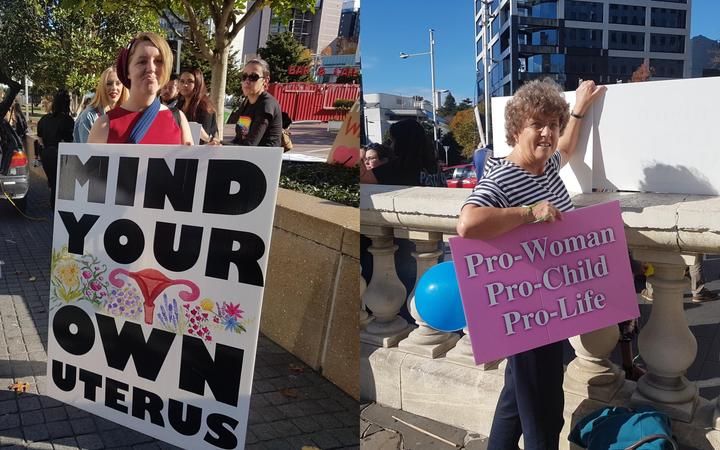 Demonstrators from both sides of the debate at a recent rally in Auckland. Photo: RNZ / Joanna MacKenzie

How does the abortion law work at the moment?

Abortion is covered by two laws - the Crimes Act 1961 and the Contraception, Sterilisation and Abortion Act 1977 - and is administered by the Ministry of Justice.

As it stands, abortion is a criminal offence. The law, however, outlines a number of grounds for legal abortion.

Abortions must be authorised by two certifying consultants.

What does the government's bill change?

Abortion will be removed from the Crimes Act and be provided like any other health service.

The current grounds for authorising an abortion will be repealed.

How will people get an abortion under the new law?

People will be able to go straight to an abortion service provider if they want an abortion.

That means they will not have to go to a doctor first to get a referral.

That should remove some of the delay and cost barriers for people accessing abortions, the bill says.

At the moment, abortion services can be difficult for some people to access, depending on where they live - some need to travel.

The current law is silent on abortion counselling, but some district health boards require this before having an abortion.

The government's changes will mean doctors will have to tell people about the availability of counselling services if they are thinking about an abortion or have had an abortion. However, counselling will not be mandatory.

What if doctors don't agree with abortion?

At the moment, doctors who object to providing abortion services have a duty to inform the pregnant person about their views.

Objecting doctors must tell women they can obtain the service elsewhere, but are not required to refer them to another doctor.

The government's bill will mean doctors will have to inform people of their objection at the earliest opportunity.

They will also be required to tell people how they can access the contact details of an abortion service provider.

How many abortions are performed in New Zealand?

According to Stats NZ, almost 13,300 abortions were performed last year - similar to the year before.

It is estimated one in four New Zealand women will have an abortion in their lifetime.

There has been a lot of talk about late term abortions - how many occur each year?

There are strict grounds for getting an abortion after 20 weeks.

Under the government's new law, there will still be a legal test for abortions after 20 weeks and people will need to get approval from a doctor.

There's a vote happening in parliament today - what's that about?

The Abortion Legislation Bill is having its first reading in parliament today.

This will be the first chance for MPs to debate and vote on it.

It will be treated as a conscience issue - that means MPs won't have to vote along party lines, so two MPs from the same party could vote differently.

If the bill passes its first reading, it will be referred to a special select committee for consideration. That select committee will report back to parliament after receiving submissions from the public.

The bill would then need to pass its second reading. It will then be debated by a committee of the whole House before a third and final reading.