Businesses around the City Rail Link expect little if anything from a proposed "hardship" fund to make up for losses they've incurred being surrounded by a construction site. 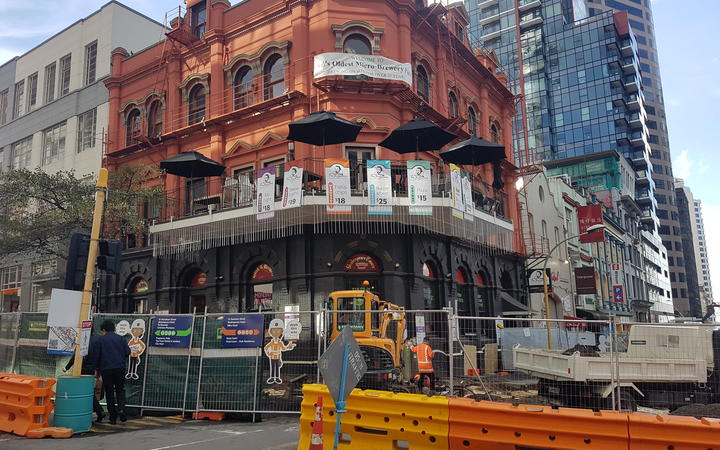 The Shakespeare Hotel, where the meeting for frustrated business owners was held. Photo: Photo /Jordan Bond

Ongoing disruption from the work - the country's largest ever transport infrastructure project, which started in 2015 - is reaching boiling point.

After previous ruling out any compensation, Mayor Phil Goff has proposed to the transport minister a "hardship fund" for extreme cases of loss. How they'll determine extreme hardship, and what form it will take - whether cash, or rates relief, or other support - is not known.

But both warn that no one has ever received government compensation for lost revenue due to public construction, and are wary it could set a precedent for other projects.

Some businesses have closed around the Albert Street area, having lost too much money, but some are struggling on. Diggers and drills, fences and closed roads, every weekday, sending customers elsewhere.

"You're stuck in a rut. And what do you do? You're suffocating," she said at a meeting yesterday for frustrated business owners.

"You try to do the right thing as a citizen - we thought it was a positive thing for the city, and we wanted to stand behind it.

"We built up a business for over 18 years, and overnight it's gone. It's destroyed."

The road works outside their shop are now finished, but in the upheaval they lost a bus stop, and things have never been the same.

Adding to the long-term disruption, the project has been delayed and delayed again and now might only be finished in 2025. Shop owners know they'll benefit when it's completed but are worried they won't survive until then.

This man, from a nearby supermarket, has been trying to sell the business - he just wants out from years of diggers and barriers tanking his business.

"My revenue is down by 70 percent. I'm behind three months rent to my landlord.

"I used to have a manager, three staff and myself. Now it's just me and my parents working 7am until 10 at night."

The now $4.4 billion link hasn't found a cent for business owners collapsing under its weight.

"I'm open to the idea of assistance to people facing real hardship as a direct result of construction work outside their business. That's the discussion I'm having with central government," Mr Goff said.

"I'm equally conscious of the fact that no government, past or present, has been prepared to entertain compensation for business disruption - but I think a hardship fund in exceptional circumstances is different, and that's what I've advocated to the Minister of Transport about.

"I'm not asking for a compensation fund. I'm saying in circumstances of extreme hardship, it would be good if council and government was able to provide some assistance to people who have been affected in that way."

Transport Minister Phil Twyford is considering the idea - but is wary of that being applied to other projects, when it hasn't before.

"We spend $4 billion a year on transport construction. Businesses from one end of the country to the other are affected by those works, and there's no precedent for cash payouts... Were we to go down that track it would require a great deal of careful thought."

Pratima Patel's husband, Jitendra, didn't have much confidence that the fund would bear fruit, especially when the measure of "extreme hardship" sounded so restrictive.

"Something's better than nothing, so hopefully they come to the party, because we lost so much money in the last four or five years," he said. "So much stress, I don't think you can put any [monetary] figure on that."