The government is looking at a proposal from the Auckland mayor to provide some sort of hardship assistance for businesses badly-affected by the construction of the City Rail Link. 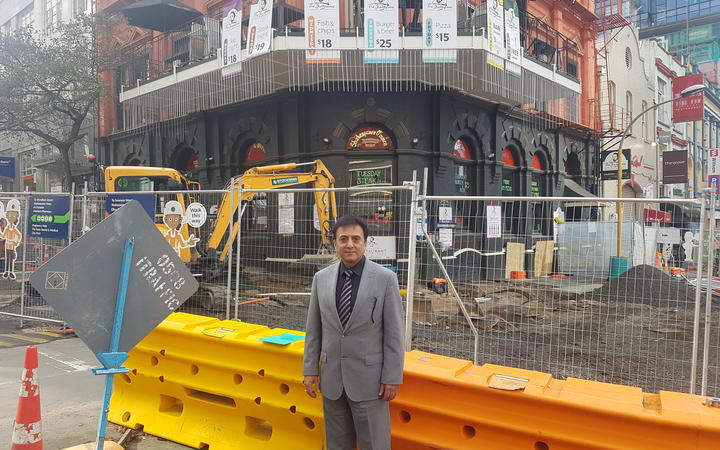 Sunny Kaushal outside the bar and restaurant he runs, The Shakespeare. Photo: Photo / Jordan Bond / RNZ

Over a dozen businesses on Albert Street have said they're struggling to make ends meet, with fewer customers weaving their way through the pedestrian detours that have been set up since work began in 2016.

They've been making calls for some time for some sort of hardship relief.

Mayor Phil Goff said he has been talking to the government about a possible solution.

He has proposed a hardship fund for businesses facing extreme hardship.

But he has been careful to emphasise that this would not be compensation.

"I am not asking for a compensation fund, I'm simply saying that in these circumstances of extreme hardship it would be good if council and government, through City Rail Link, was able to provide some assistance to help people who have been affected in that way."

But he stressed that there was no precedent for governments providing cash payouts for people whose businesses had been affected by construction works.

"Were we to go down that track, it would require a great deal of careful thought," Mr Twyford said.

Shakespeare Hotel owner Sunny Kaushal said like many businesses in the area, he had fewer customers through the since the street was torn up for the country's biggest transport project back in 2016.

"The street has become isolated and abandoned for the last two years. It has lost foot traffic and customers, and visitors are avoiding coming to this street," he said.

"And the businesses ... were left to die a slow death."

Mr Kaushal said many of the businesses were struggling to pay their staff, some owners were working second jobs, and others were being refused loans from their banks.

He and the other business owners had been crying out for help - for some time.

"City Rail Link must take responsibility for the business disruption they have caused over the years in the street, and they must pay financial support without any delay."

But to date, no financial support had been provided.

Ms Kaye said if the council and government didn't come to the party in this case, there could be implications for other major infrastructure projects in Auckland.

"What has happened here to this group of people has been extraordinary hardship, but if we do not get this right, we will not be able to deliver major infrastructure projects in the future, because we will destroy people's lives.

Councillor Mike Lee - who was an early backer of the City Rail Link - said the businesses on Albert Street were bearing the brunt of the delays to the project.

"This job was meant to be finished months ago, and I walk past every day, it looks like the frontline of World War I and instead of getting better, it seems to get worse," he said.

Mr Twyford said there was no timeframe for making a decision on Mr Goff's hardship assistance proposal.