A New Zealand tattoo artist who took explicit photos of his client's thigh tattoo and then shared them in a group chat using demeaning language has sparked a global movement. 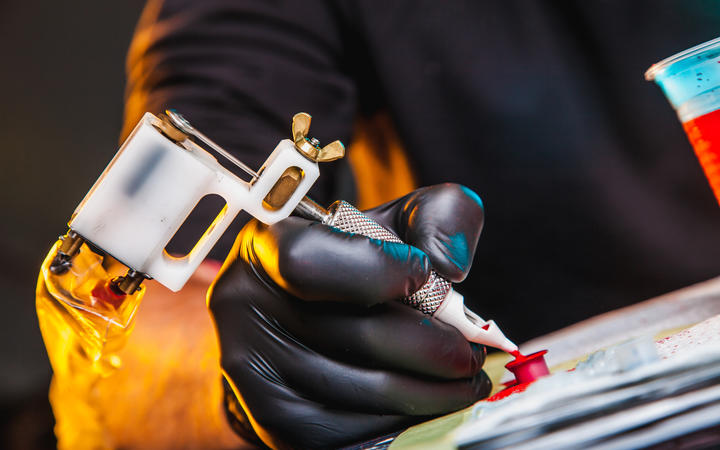 Since the allegations, 120 artists from around the globe have joined Cover Ups Against Abuse - providing free cover ups for people assaulted by their tattooist.

The group was formed by Claire Beatrice from the US and Jessica Rubbish from the UK, after hearing horror stories about tattooists taking unsolicited pictures of clients, inappropriate touching, and other kinds of physical and emotional abuse.

A woman, who RNZ has agreed not to identify, said she has been assaulted multiple times while being tattooed.

"I've had hands slip up the thigh - 'accidental' - when tattooing the back of my ankles - don't know how a hand gets that far up the body when an ankle is involved."

She said she wants women to really think about who they trust with permanently altering their bodies.

Another woman, who has received a tattoo from the New Zealand artist accused of inappropriate behaviour, has since had a "blast over" - when a tattoo is fully or partially covered with a new tattoo.

"I didn't want to go over it completely, because I quite liked the piece that I had.

"By doing the blast over it was acknowledging the behaviour of the tattoo artist and ... making a stand against it," she said.

"But doing something that complimented the artwork, and that put a new spin on it so it kind of made it mine again.

"By altering it we kind of felt like it showed we didn't condone his behaviour and kind of turned it something that wasn't his anymore," she said.

The tattooist is not currently based in New Zealand and works as a travelling artist.

Auckland tattooist Hanna Clough, who has signed up to be a part of the campaign, said tattooing was an intimate experience.

She said it was disturbing having the marks of an abuser on your body.

"Anything permanent on your skin, especially done by an artist who's given you a negative association with it, can be traumatising.

"You have to live with it every day, and that can really be debilitating - especially if there is strong PTSD [post traumatic stress disorder] emotions connected with it."

Ms Clough said some people may not want to fully cover a tattoo as it could show a healing journey, and they did not want to sweep the problem under the rug.

"Acknowledging it and healing from it - especially from an artist's perspective having someone come to you and say 'look, this is what happened to me, this is what I want it to become' even if [the tattoo] is not completely covered - it's still just healing, in a sense."

She said the campaigned showed there were a large number of people in the tattoo community who are willing to stand up against abuse in the industry.