The Hawke's Bay Sikh community is objecting to a decision by the Hastings District Council preventing it from building a new temple on land zoned for agricultural production. 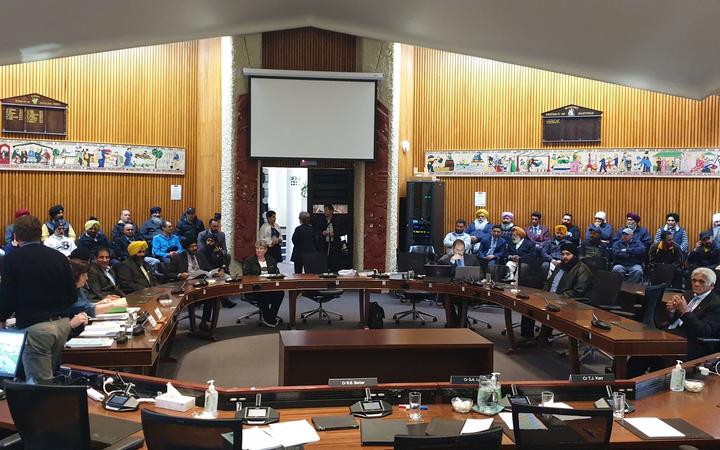 The Sikh community at the meeting this morning. Photo: RNZ / Anusha Bradley

The New Zealand Sikh Society has been planning to build a $4 million temple on 4ha of land since 2010, but its resource consent was denied after a district plan change in 2015 zoned the site as productive-only land.

The community said its population was growing and it bought the land with the intention of building a new temple.

A council hearing was packed with Hawke's Bay and Auckland Sikh community members this morning to decide whether consent for the building would be allowed.

Evidence was be submitted from both the sides and a panel of three district councillors were expected to make their decision in private.

Gudwara Sahib Hastings committee member Jagjiwan Singh said the new temple would be open to all members of the community and it would be modelled on the country's largest Sikh temple in Takanini, Auckland, where expansive gardens and kitchens reguarlarly fed the wider community, including the homeless.

"Everybody is welcome to our place of worship, [there'll be] free food, a free place to sit together. We will do gardening and projects like Takanini, we have the same projects in mind."

A Sikh MP, Kanwaljit Sing Bakshi of the National Party, flew from Auckland to show his support at the objection hearing and said the council should make an exception in this case.

"Due diligence was done before buying the land. Council was informed about it and when they made plan changes in 2015 they should have considered it, before declaring it as productive land."

The council initially rejected a resource consent application from the Sikh Society of New Zealand in January, saying it could set a precedent allowing what it calls "urban creep" on productive land.

A Hastings District Council report to councillors advising them not to grant the consent said it would create an adverse precedent.

"Granting this application would also likely undermine public confidence in, and adversely affect, the integrity of the District Plan and create an adverse precedent."

The society bought the land in 2010 with the intention of building a new temple and it had discussions with the council at the time about allowing a temple on the site.

The society wants to build the temple, which would also feature a library and residence for its head priest, on the outskirts of Hastings. The new temple would be open 24/7 for prayer and host up to 700 people for special events like weddings.

Despite the housing shortage in Hastings, several housing developments proposed on farmland in recent years have been rejected by the council for the same reason.

A decision is expected in 15 days.