Questions are being asked about a $2 million blow-out to a roofing and maintenance project at the New Plymouth District Council. 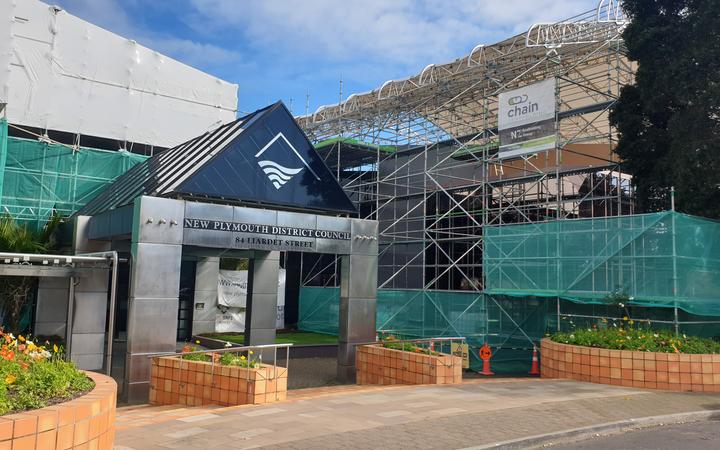 Nicknamed the "purple palace", the council building has been swathed in builders-wrap and scaffolding since late last year, and now even more is going up.

Work began on the 30-year-old council building in November as part of a $1m project to repair the south wing roof and do some maintenance, such as painting.

The council says that work led to the discovery of a "second necessary maintenance project" involving repairs to the atrium, an adjoining deck, and the council chamber's roof.

The budget has now blown out to $3.1m, and some councillors are not happy about it.

Councillor Shaun Biesiek, who runs a car sales business, said he expected the project to stay on budget, but the rising bill had come as a surprise.

"It's definitely a shock considering the original total we were told, and it's not a small budget blow-out. You're talking, you know, a couple of million dollars."

Councillor Murray Chong, a mortgage and finance advisor, said ratepayers would be horrified if their own building projects blew out by more than 200 percent.

"Surely half-way through the job you know that it's going to blow-out, surely. And that's a concern to me.

Councillor Mike Merrick, a former police officer and retirement home manager, was happy the rising cost was being kept within overall council budgets, but felt news of the blow-out had been sprung on councillors.

"It goes back to whether it is actually a blow-out, but yes, generally in those kinds of situations councillors ought to receive a briefing, and to my knowledge we never received a briefing."

The Civic Centre had an upgrade in 2017 that cost ratepayers $3.8m and included earthquake strengthening, the installation of a cafe (complete with designer carpet featuring an abstract motif of Mt Taranaki), and the creation of open-plan work spaces.

But despite this, not all councillors spoken to by RNZ have a problem with outlaying more cash on the building just two years down the track.

Former chief executive of Port Taranaki, councillor Roy Weaver, did not think the increased bill for the roof constitutes a blow-out. 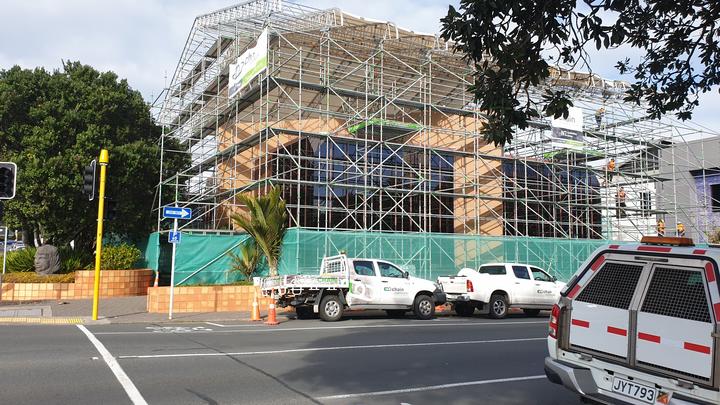 "I see it as maintenance work that needs to be done on the building, and it makes good sense to do it now.

"The building is coming up 30 years old, and you'd expect to give it a birthday brush-up at about this time, particularly around water-tightness issues, so I think lets get on and get it done."

Councillor Marie Pearce was of a similar mind.

"I've always believed if you are going to do a project you do it once and you do it well, and often with these big jobs there are a few surprises along the way.

"Everyone will be happy when it's finished, along with councillors and I'm sure all residents of New Plymouth."

Out on the streets of New Plymouth ratepayers' views were pretty clear.

Judith Geurts is a close neighbour of the Civic Centre.

"We go past it all the time because we live not far from there and every time we see more scaffolding going up we think 'oh how many more millions is that going to be now?'."

Barbara, who only gave her first name, takes a cynical viewpoint.

"This is the way official developments go, isn't it? Going up in price seems to be the order of the day and the rest of us have to pay for it."

"I think it's terrible. I described it as baby poo. I think it is dreadful."

"It's the colour of nappy poo. You know we're Taranaki - maybe those pillars which are sort of a beige-brown, they could have been yellow."

The council's chief financial officer, Joy Buckingham, said the building was well-known to have issues with leaks because it was built in the early 90s and its roof has reached the end of its life.

Ms Buckingham said the current work was being funded out of existing budgets and the cost will be offset by annual commercial rents of close $500,000.