The Ministry for Primary Industries is thumbing its nose at the Supreme Court by continuing to allow the export of swamp kauri logs, a Northland conservation group says. 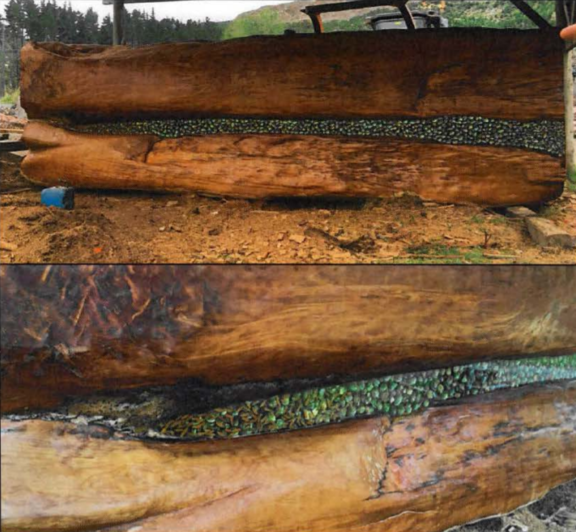 Kaihū kauri exporter Nelson Parker sent this log that had been dressed and decorated to China. Photo: Supplied / Forestry NZ

The ministry recently decided not to prosecute Kaihū kauri exporter Nelson Parker for sending a log that had been dressed, and decorated, to China.

Far North Environmental Protection Society said MPI officials decided after discussing it among themselves that the log was a sculpture.

President Fiona Furrell said that made a mockery of the group's Supreme Court win last year, when the judges said only finished products could be exported, and a log would have to lose its identity as a log, to qualify.

Ms Furrell said the log in question was still clearly a log, and it was ludicrous that a group of forestry staff should have defined it as a finished work of art.

"Basically, it's no different to the giant log that was sent out from Kaitāia a few years ago that looked like Casper the Friendly Ghost," Ms Furrell said.

"It had a bit of paint and a few scratchings on the side and what looked like a big smiley face at the top. That was not a sculpture and neither is this. It is simply unbelievable that MPI staff are allowing this rort to continue after the Supreme Court decision."

Photographs of the log show it was sanded and oiled; an internal fissure was filled with resin and pāua shells, and large carvings on the outside depict a tiki, a fern and a bird.

The words "New Zealand Kauri" have been carved at the top of the log, which Mr Parker has told MPI will be used as an exhibition piece by the Chinese buyer.

MPI documents show its staff monitored the work on the log, but it was exported in December before the ministry reached a decision on whether it was a lawful export.

Emails show the ministry made its decision not to prosecute Mr Parker in February after seeking advice from the Ministry of Culture and Heritage.

The ministry had replied that the degree of modification was not necessarily a primary factor in an artistic assessment.

MPI then found the export of the log-sculpture was lawful under the Forests Act, in light of the Supreme Court judgment.

Ms Furrell said the conservation group was considering its next option, which could mean taking MPI to the High Court for a judicial review of its decision.

"We want the minister, Shane Jones, to answer this ... does he consider it's okay for his officials to thumb their noses at a Supreme Court ruling? Because that is what they are doing," Ms Furrell said.

Both the MPI and Shane Jones have been approached for comment.