A secret witness in the trial of a man accused of being a lookout in a violent dairy robbery has told a court he overheard the crime being planned.

Gita Patel and her son Siddhartha were both stabbed while minding their family business Hylite Dairy in Grey Lynn just after 7pm on 19 June, 2018.

Ngatama Kaienua, 28, is accused of keeping watch outside the store while a 16-year-old, who is before the Youth Court, entered the store with a large kitchen knife.

The Ōtāhuhu man is defending charges of aggravated wounding and assault with intent to rob at the High Court in Auckland this week.

Today a former associate of the man, who has name suppression, told the court on the day of the attack he overheard Mr Kaienua and the teenager talking about robbing a dairy to get money.

The man said he was distracted playing Playstation but told them not to rob a store before the pair went outside to have a smoke.

"I told them not to and that they were just being idiots."

He told the court Mr Kaienua returned 20 minutes later looking panicked and the teenager later turned up looking "distressed and on edge".

"[The teenager] had a t-shirt around his hand and he said he'd cut himself ...he said something like he'd done it, he'd stabbed them and I looked at his hand and there was a deep cut."

Mr Kaienua gave evidence in his own defence this afternoon; telling the court his associate's story was "an absolute lie".

"I had no involvement and there was no talk of any such thing like a robbery."

He said he'd been drinking alcohol with friends that day, including the teenager who he considered "like a little brother".

The court heard the 16-year-old was on electronically monitored bail at the time and had cut his bracelet off. 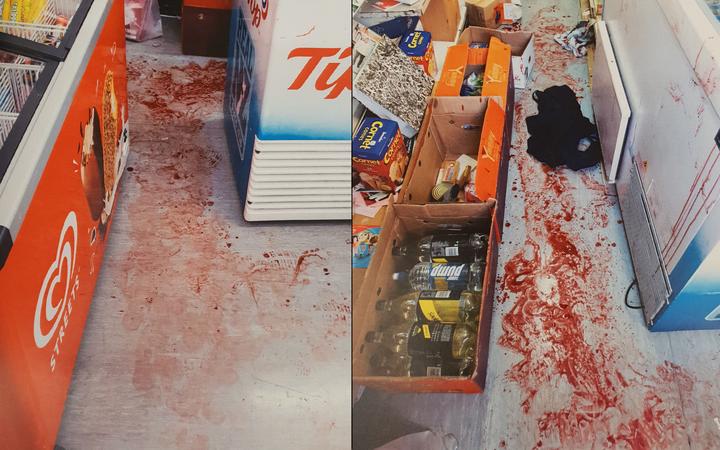 Blood on the floor after a violent robbery at a dairy in Grey Lynn. Photo: Supplied / NZ Police

Mr Kaienua said the teenager became agitated when the group told him he'd better hand himself in to police.

"He fought us and pretty much had a fit and ran off ...I found him along Great North Rd and we just carried on walking. I just followed him, kept talking to him and we ended up in Grey Lynn."

Mr Kaienua said they walked around, the teenager still unwilling to return to their friends, before the 16-year-old made a spontaneous decision to stop into the Hylite Dairy.

CCTV footage shows Mr Kaienua standing by a bin, glancing down at his phone, and then slowly walking away from the dairy after the teenager fled the scene.

The 28-year-old denied Crown prosecutor Brian Dickey's suggestion he'd acted nonchalant so as to not draw attention to himself after the violent stabbing.

He also denied a text he sent his associate while standing outside the dairy that read "now" meant the robbery was underway; saying he intended to tell his friend they were returning from Grey Lynn at that time.

The defendant had earlier told the court he had $60,000 in a family bank account and didn't need to rob a dairy for money.

He said he evaded police in the days after the robbery because he knew he'd be taken into custody and hid in a wardrobe when they arrested him because he was scared.

It's the Crown's case the pair planned to rob a store and cased the Hylite Dairy before Mr Kaienua stationed himself outside as lookout and the teenager went inside.

The prosecution said that while Mr Kaienua did not hold the knife he knowingly and intentionally aided, abetted or incited his co-accused to carry out the robbery.

The judge-alone trial before Justice Gault is due to wrap up this week.