One of New Zealand's rarest birds is having its best breeding season in decades. 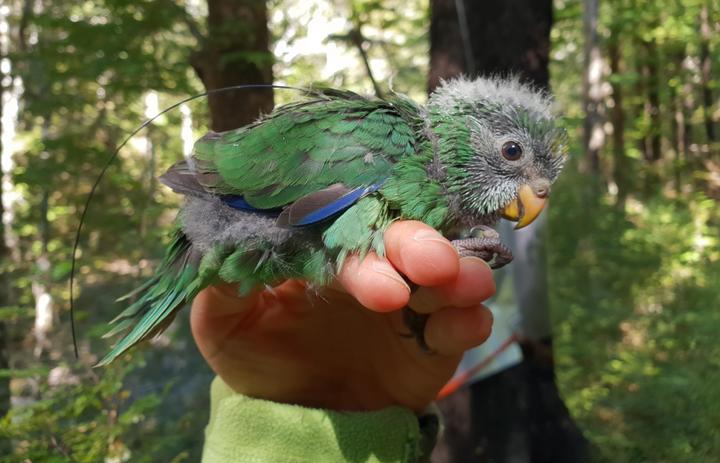 A kākāriki karaka (orange-fronted parakeet) chick with a transmitter attached to it. Photo: Supplied / DOC

The population of kākāriki karaka (orange-fronted parakeets) is estimated at between 100 and 300.

This year at least 150 chicks were born in the wild, potentially doubling the population.

Department of Conservation (DOC) field staff have found 31 kākāriki karaka nests in the wild in Canterbury this season - more than three times the number of recent years - and the birds are expected to keep nesting for several months yet.

Conservation Minister Eugenie Sage said the boom was due to an abundance of beech seeds, which the birds feed on.

"This budgie-sized native bird, a taonga species for Ngāi Tahu, eats plants and insects, and during a mast year, seeds dominate their diet. This year's beech mast is looking like the biggest in more than 40 years.

"There has been so much seed on the beech trees the birds just keep on breeding with some parakeet pairs onto their fifth clutch of eggs. When there's no beech mast they typically have just one or two clutches." 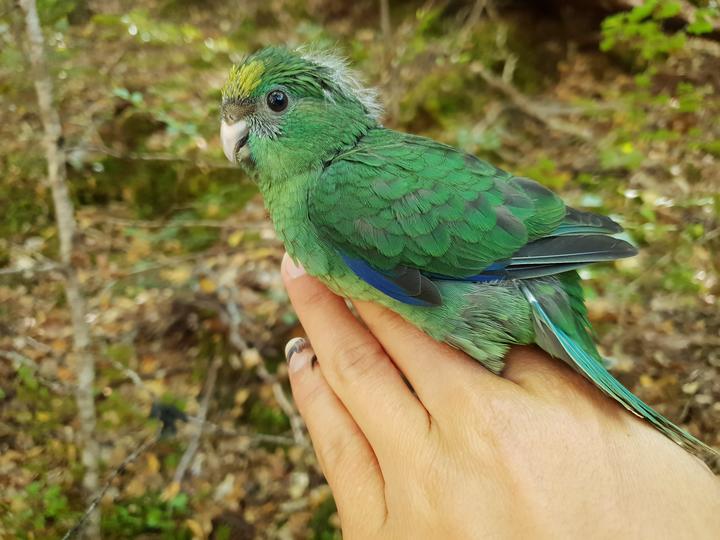 This year 62 kākāriki (37 from the Isaac Conservation and Wildlife Trust, 17 from Auckland Zoo and eight from Orana Wildlife Park) were released into the Hurunui South Branch with Christchurch Helicopters flying the precious cargo.

Most of these birds have survived and are showing signs of pairing up to breed.

The rarest of New Zealand's six kākāriki species, orange-fronted parakeet is found only in the Hawdon and Poulter valleys in Arthur's Pass National Park and Hurunui South Branch in Lake Sumner Forest Park.

A successful population has also been established on Blumine Island/Oruawairua in the Marlborough Sounds. The orange-fronted kākāriki population is estimated at 100-300.