By Cass Mason for Newsroom

A former Auckland police officer says she was pushed out of the force after being approached to access information from the police database - and refusing. 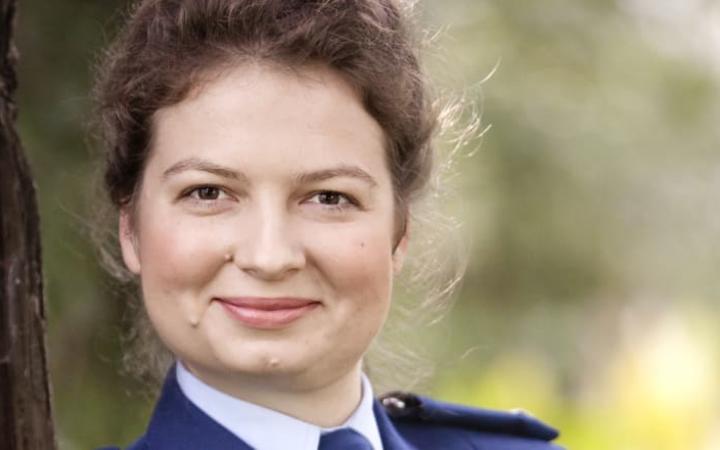 Victoria Kirichuk had been with NZ Police as a constable for four years when she says she was approached at a dinner party to access confidential information from the police database in exchange for money. Photo: Supplied

Victoria Kirichuk, whose family moved to New Zealand from the Ukraine in 2002, says she was approached and offered three times her constable's salary in exchange for confidential police information.

After rejecting the offer and laying a complaint with police, she says she and her family became victims of a prolonged harassment campaign by associates of the person who made the recruitment attempt. She eventually lost her job after nine years with the police.

At the time, Kirichuk's father Alexander was an intended business partner of the then-director of the Waiwera group of companies, Mikhail Khimich. It was at a dinner party where guests included a number of people involved with Waiwera operations that Victoria Kirichuk says she was approached.

Newsroom has documented other aspects of the Waiwera business failure and the personal and business issues surrounding Khimich in this story.

Documents show the Kirichuks laid multiple complaints - with police, the IPCA, OIO, IPONZ, Immigration NZ, OFCANZ, the Auckland Council, the Human Rights Commission and the SIS - complaints which appear to have never been properly investigated.

Police have declined to comment on the grounds employment matters are private.

However, a New Zealand Police spokesperson said: "We want to assure the public that police take any complaints involving allegations around staff conduct/complaints against staff seriously."

Victoria Kirichuk had been with NZ Police as a constable for four years when she says she was approached at a dinner party in Silverdale in May, 2013. 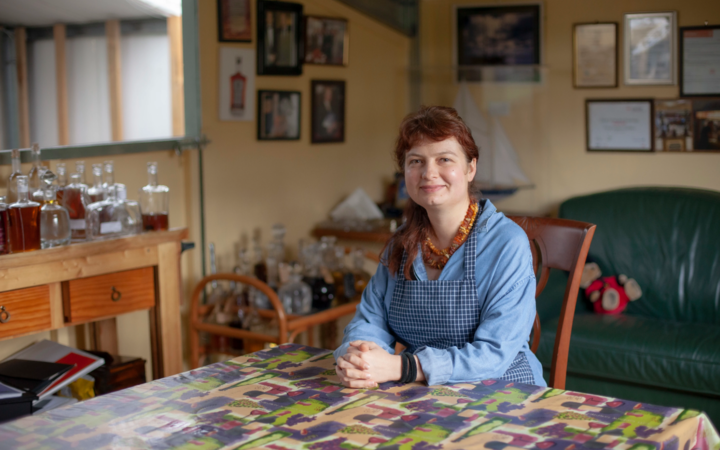 Victoria Kirichuk in the distillery based at her home in Puhoi. Photo: Joe Dowling

She says she was initially approached that evening to inquire about her salary as a constable, and then offered "three times as much" to provide information from the police database.

She wrote it off as a drunken joke until the matter was allegedly raised again with her father days later, with the person urging her to "think well on the offer before refusing it".

A detailed report she then submitted to Inspector Steve Kose at Police on 12 May - nine days after the alleged recruitment attempt - says the following:

"It was just a normal friendly conversation, during which [Newsroom has redacted the name] asked me what sort of plans I have for the police and what my salary was. I replied ... that I was on a normal Constable package. After that [they] told me that this income would not provide me with comfortable lifestyle and that if I agreed to collaborate ... they would pay me handsomely.

"According to [name redacted], I would be getting the amount equal to three times of my police salary for accessing the New Zealand Police computer system from time to time and provide them with the information 'they' might need."

After both father and daughter say they refused, there followed a series of phone threats and two cases of an intruder entering their property at night. Each incident is documented in reports to police.

Email exchanges between Victoria Kirichuk and her superiors show police promised to put protection in place for the family, but Kirichuk says nothing was done.

Unable to get her complaints taken seriously, she took her concerns to the IPCA in 2015. The IPCA referred her complaint back to police, which put her in a compromised position, she says.

It was after that that her job at police started to become complicated, with officers she went out on jobs with filing multiple and regular complaints about her driving, firearms handling, and state of mind (she had never had any problems with this before).

Police tried to make her do a psychiatric assessment, but she refused. Email correspondence between high-ranking officers obtained under the OIA show them discussing how to get her to do the assessment, but between these and other email interactions with superiors and support staff, Kirichuk wasn't able to get a response as to why she had qualified for the assessment.

She went to see a psychiatrist independently, who wrote a letter saying there was nothing wrong with her, apart from work-related stress. Newsroom has a copy of the letter.

It was around this time Kirichuk noticed her home address had been changed in the police system - to the very address where she had been approached. This was frightening not only because she felt it implied someone inside police had to have changed it, but because if she had made a 111 call, police would have been sent to the source of her problems, not where she would likely be needing help.

The address change - which formed part of her 2015 IPCA complaint - was explained by police and the IPCA as a copy-and-paste error from a trespass notice the family had been issued by Mikhail Khimich and his associates over a Waiwera Organic Winery incident.

Victoria Kirichuk says this explanation is not plausible. Because she holds a handgun licence, licence-owners' residential addresses in the police system can't be changed without taking several comprehensive steps. It's not possible that whoever made the change didn't know what they were doing, she says.

Asked last week about the reason for the address change, police again maintained it was a copy-and-paste error from the trespass notice - which has since found to be invalid and illegal, police documents show.

On the back of this discovery and against the NZ Police Code of Conduct, Victoria Kirichuk conducted an individual name search on the police database in a move that would contribute to her dismissal.

She says she did this for two reasons: to see where the investigation of her complaint was at, and out of fear for her family's safety. 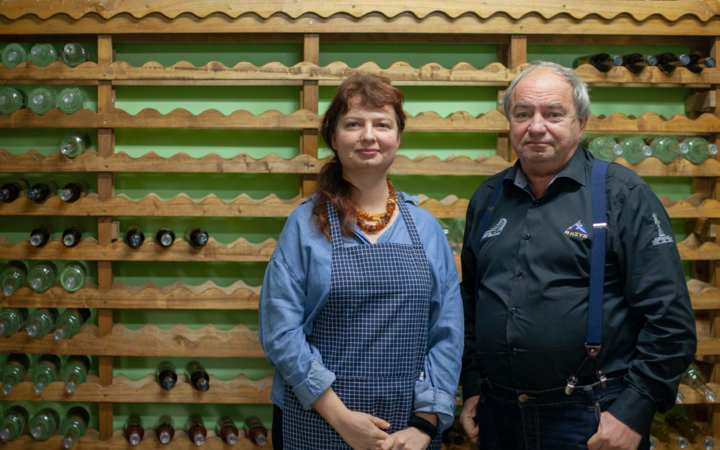 Victoria Kirichuk with her father Alexander. Both say they never got the protection they asked for when being subjected to a harassment campaign. Photo: Joe Dowling

She was eventually dismissed from police in 2017 after nine years, seemingly for the search she made of that name. Police aren't allowed to look in the database for anything except that which is directly related to the cases they are working on.

However, a Herald inquiry published in 2011 found almost all police caught making 'unauthorised checks' received a slap on the wrist (first or second warnings). The only officers who appeared to lose their jobs were those who passed the information on to outside parties or used it to engage in crimes, which she did not do.

Victoria Kirichuk also notes that because police use the database so frequently (a single officer can make up to hundreds of searches a day) it isn't possible to bring up a complete list of police's individual searches to find anything damning because there are just too many searches for each user.

Whoever found she had searched a specific name must have been looking specifically for that, and entered the name as a term to bring it up.

When Victoria Kirichuk was informed her job had been terminated on 2 March, 2017, she was called into a room with Inspector Steve Kose, where she was instructed to hand over her police phone immediately.

She has made repeated, documented requests for an official reason for her firing and has not been given one.

The IPCA promised to follow up on her 2015 complaint, and then apparently never followed through. Both Victoria Kirichuk and her father gave extensive statements to police about the whole affair, documented in an electronically recorded interview transcript with Julie Foster of Rodney CIB at the North Shore Policing Centre on 5 May, 2015.

Victoria Kirichuck says: "The IPCA never made any attempt to contact me or monitor how the police complaint was handled by Waitematā Police where they sent it, and simply closed the file after being told by the police that: My 'complaint Ref 14-2188 was resolved by way of mutual agreement between me and the Police'. I had written to the IPCA again after that, saying that no such 'agreement' was ever reached, plus bullying has intensified at my workplace as the result of the IPCA forwarding my complaint to Waitematā, however, my second/repeated appeal to the IPCA was just fruitless as the first one.

"We have a huge problem with safety, but the flawed system is one concern. There are some good systems and processes, but if they are not adhered to ... it goes nowhere. If [police and SIS] aren't looking after the country, then who is?

"We want to live somewhere safe. We left the Ukraine to be safe. However, I'm in New Zealand and I can see things happening in the wrong way. They didn't do anything with the information I supplied; the fact that I was approached … the person who did that has come to New Zealand a number of times since then.

"They [authorities] are not following up on important leads. My family needed protection but they got me into trouble and dismissed me."

She feels she and her family have been let down by the police and the New Zealand intelligence services.

Alexander Kirichuk added that as a New Zealand citizen and taxpayer, he was frustrated with the inaction from both the current government, and the previous government, for so many years.

"Such persistent tolerance by New Zealand authorities to criminal actions is really suspicious. I believe that NZ Police and SIS, to whom I applied multiple times asking for the protection for my family, are in fact creating bonanza for international organised crime."

Today, they are still fearful. Alexander Kirichuk says the last threat he received was from a Russian phone number, in which the caller said he could expect to be reunited with his (late) grandparents soon. The Kirichuks want to go on the record and tell their story because they believe it will offer them protection.

This story first appeared on Newsroom.