An Ōtara man has been jailed for at least 17 years for murdering a man he suspected of having an affair with his wife. 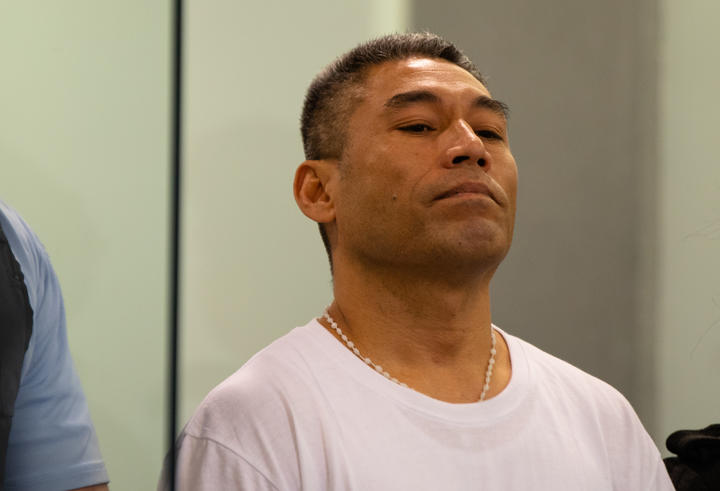 Ueta Vea appeared in the High Court at Auckland this morning after pleading guilty to murder in May.

The 45-year-old ambushed Laulimu Liuasi with a machete on the grounds of Ōtara's St John the Evangelist Church on 13 January.

Both he and Mr Liuasi knew each other well. They were congregants of the church and had previously completed grounds maintenance together.

At the time of his death Mr Liuasi, 62, was working and living on the church grounds as a handyman.

Vea discovered flirtatious texts between Mr Liuasi and his wife and suspected the pair were having an affair last November.

After confronting them several times, an intervention was facilitated by the church's priest but the affair was denied and his wife later asked him to move out.

Tensions came to a head on at a church function on Saturday 12 January where Vea, who had been drinking, aired his suspicions in a heated exchange.

That evening his wife contacted him and asked him to move out of the family's Ōtara home; a precursor to the end of their marriage.

The next day Vea spent time with his family in Onehunga and, on his way home, asked his wife to stop by her home on the pretence he wanted to collect an item for work.

The 45-year-old actually retrieved a machete from a cupboard and wrapped it in a blue lavalava before his wife dropped him home.

He left his address about 5pm and walked to the church where he watched Mr Liuasi leave his dwelling on the church grounds to ring the bell.

Vea then climbed through a window of the accommodation and lay in wait behind a wall in the kitchen.

When Mr Liuasi returned he ambushed him; striking him on the back of the neck, shoulder, hand and torso.

During the attack, the defendant heard Mr Liuasi said "Fia ola" which means "I want to live" or "help".

Justice Moore said Vea's actions after the murder were "measured and calm".

Vea drove Mr Liuasi's car to a dairy on Princess Street and walked to his wife's home to tell her what he had done.

She immediately drove them back to the church where she found the priest and accompanied him to Mr Liuasi's body.

When spoken to by police, Vea admitted the murder and told them he was angry about the text messages.

She said she still had a sliver of hope it was all a mistake until police confirmed the death to her family the following day.

Family members cried in the packed public gallery as Ms Shek described watching her family break down and the ongoing effects she felt six months on.

"My dad died in the arms of another man all because he was 'masalosalo'; suspicious."

A number of victim impact statements, including one of Mr Liuasi's wife Alitasi Shek, were read to the court in Samoan.

Justice Moore lent his reading glasses to Mrs Shek after she stood to read her statement and realised she had left hers at home.

After hearing emotional statements from the victim's family, the judge said what Vea had done was "as inexcusable as it was irreversible".

"Mr Liuasi was deeply loved by his family and it's impossible not to be moved, not only by the sentiments which each victim has so eloquently expressed, but also their descriptions of the huge hole the loss of a father and husband has left."

Vea sat in the dock and stared ahead, unflinching, during the hearing sentencing until Justice Moore told the court his family had engaged in the Samoan tradition of 'ifoga'; a ceremony where a person's family asks that of someone they've wronged for forgiveness.

His family wept in the public gallery after he was jailed for life with a minimum non-parole period of 17 years.