Taupō residents will have to keep observing water restrictions for another three to five days as the town copes with yesterday's massive sewage spill.

A water main on Lake Terrace burst yesterday, creating a washout which collapsed part of a footpath and took out the sewerage line beneath.

The flow was plugged on Tuesday night but not before about 800,000 litres of waste ended up in the lake and in Waikato River.

That is more than four times more than Taupō District Council previously estimated had flowed into the water.

Taupō District Council said a number of pumps have been brought into pump the sewage away from the area while engineers pondered a solution.

"If you don't need to flush please don't, please take care around your shower use and doing the dishes and if you can reduce that please do so," Mr Green said.

"Every litre less of waste water that leaves your house is a litre less that we have to deal with." 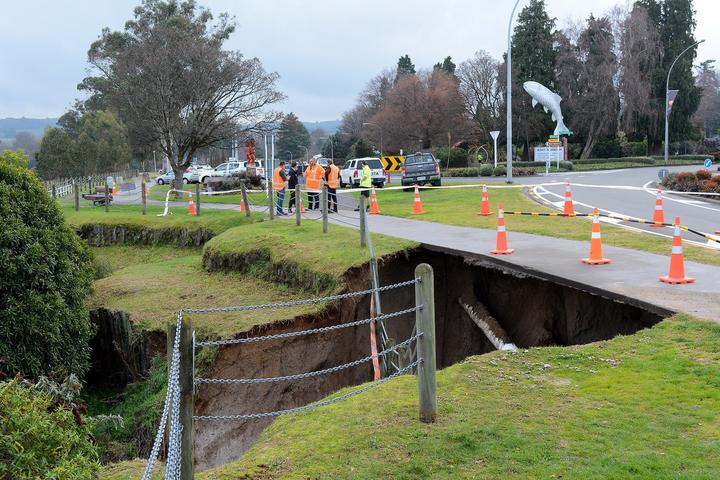 Mr Green said it appeared people were heeding the advice as the volume of waste coming down the pipes has decreased.

Investigations into the cause of the breaks are ongoing.

"Our records show that the water pipe was installed in 1999 and it had a life expectancy of 100 years," Mr Green said.

"The wastewater pipe was installed in 1973 and had a life of 80 years. This was not related to aging infrastructure, no amount of money could have prevented this from happening."

It is possible the water pipe had split due to ground movement. 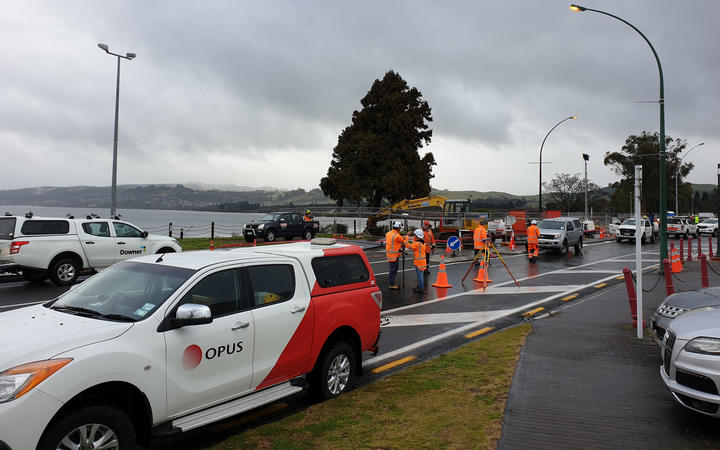 The scene of the cleanup at Lake Taupō. Photo: RNZ / Andrew McRae

Lake Terrace, the road that leads along the lake front and around into the main street is closed to traffic and is likely to remain that way for some days.

It is normally the busiest corner in the CBD, with a number of restaurants, cafes and other businesses, most of them very reliant on passing traffic.

That has now changed with only foot traffic getting through.

Greg Sherson, who owns the Waterside Cafe and Restaurant, believes the road closure will have a substantial effect on his business.

"Normally it is a busy time and usually because of the weather at this time of year people park and go to a place that is reasonably close but our main carpark is basically closed off and the road is closed off."

He said there might be some benefits from all the work going on across the road.

"Our bar manager knows a few of the workers there yesterday and they came for a couple of beers afterwards but we are still down a good 25 percent on sales yesterday and that's just half a day of road closure." 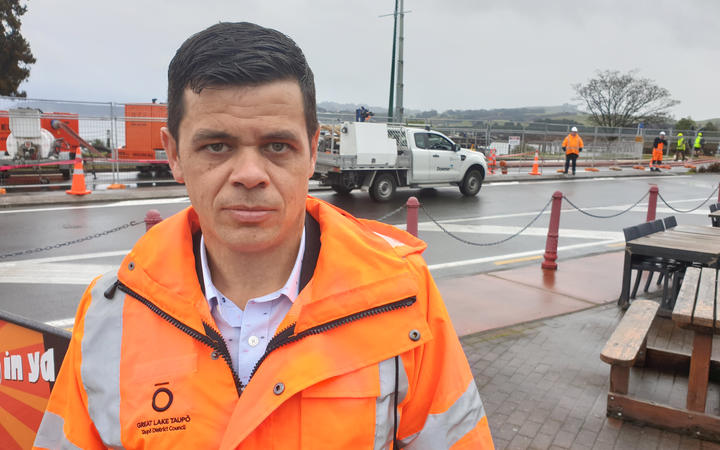 Dustin Habenger from Taupō Rod and Tackle, which was just around the corner, said while he had a couple of customers on Wednesday morning, business was very slow.

"They can't just park outside, so we are definitely going to feel this."

Lisa Boyd, who runs Lisa's Barber Shop, said she was not as reliant on passing traffic and was hoping her loyal customers would stick with her.

"This time of year anyway is quiet just before the peak of the school holidays, so time will tell next week when we are usually busy."

She said she did not believe the sewage spill would have a long-term effect on the town's tourist reputation.

"I don't think it will have an impact. They will fix this up in a couple of months and it will be back to normal by Christmas."

'We are happy to just go with the flow'

Locals are being asked to restrict their water use particularly at peak times for the next three to five days.

One visitor to the town, Ray Mudford from Hamilton, said water and flushing restrictions have not been much of an issue.

"The council is dealing with it appropriately and we are happy to just go with the flow."

He and his wife are staying at a local resort and say they have not been given any instructions on water conserving water but have got the information from the media.

One resident, Wayne Wilson is resigned to doing what the council asks about conserving water.

"You can only cross your legs for so long."

"Being a male it is a little easier for me but my wife isn't to chuffed about it," he said.

He said he was not concerned for the town's tourism reputation because of the sewage spill.

"I think if they deal with it properly their reputation should be fine."