A New Zealand technology commentator says Donald Trump's latest Huawei concessions are effectively a "get out of jail free" card for the Chinese company. 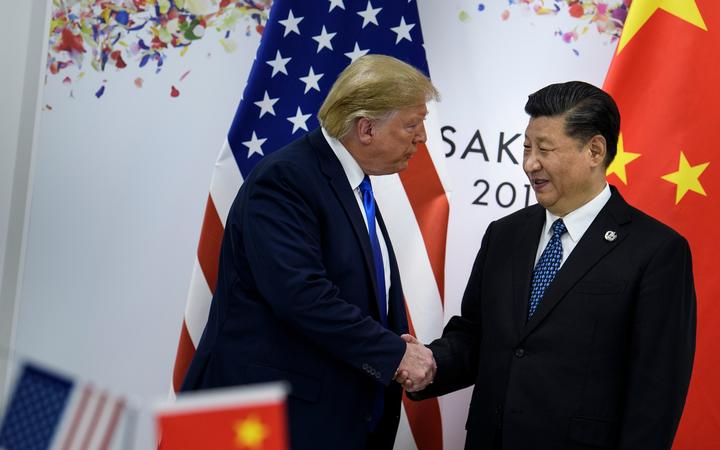 China's President Xi Jinping, right, greets US President Donald Trump before a bilateral meeting at the G20 Summit in Osaka. Both leaders are looking at ways to restart trade talks between their two countries. Photo: AFP

Huawei is the world's biggest telecom network gear maker, but the Trump administration has said the firm is too close to the Chinese government and poses a national security risk.

He has lobbied United States allies to keep Huawei out of next-generation 5G telecommunications infrastructure.

Now, as he tries to restart trade talks with China, Mr Trump has said he will allow US tech companies to resume selling products to Huawei.

He said a ban wasn't fair to US suppliers, who were upset by the move.

Tech commentator Paul Brislen said this is significant, given the US-led, global disapproval Huawei was facing.

And he said Mr Trump's comments may make other countries, including New Zealand, start reconsidering their positions on a 5G Huawei rollout.

"It's very much the beginning of a movement rather than the endgame. The GCSB [Government Communications Security Bureau] here have said that their concerns are totally un-influenced by politics, it's purely about the security of the situation and about Huawei's role in any future network build... they'll have to potentially revisit some of that commentary in light of all of this," he said.

"If the Americans are no longer concerned, should New Zealand be concerned is the question that they'll have to answer and that's going to take some time to unpick I suspect."

The concession on Huawei came as the United States and China agreed to restart trade talks after President Trump offered other concessions including no new tariffs in order to reduce tensions with Beijing.

China agreed to make unspecified new purchases of US farm products and return to the negotiating table.

No deadline was set for progress on a deal, and the world's two largest economies remain at odds over significant parts of an agreement.

Critics from both sides of US politics are complaining about Mr Trump's decision to allow American companies to resume sales of materials to Huawei.

Republican Senator Marco Rubio tweeted that any agreement to reverse the recent US action against Huawei would be a "catastrophic mistake" and that legislation would be needed to put the restrictions back in place if that turned out to be the case.

If President Trump has agreed to reverse recent sanctions against #Huawei he has made a catastrophic mistake.

It will destroy the credibility of his administrations warnings about the threat posed by the company,no one will ever again take them seriously. https://t.co/jEhHcblsVG

If President Trump has in fact bargained away the recent restrictions on #Huawei, then we will have to get those restrictions put back in place through legislation.

And it will pass with a large veto proof majority.

Last month, Mr Rubio and Democratic Senator Mark Warner urged Mr Trump not to use Huawei as a bargaining chip for trade negotiations.