Last night was the coldest of the year so far in Christchurch, with clear, calm days bringing frosts to parts of the country. 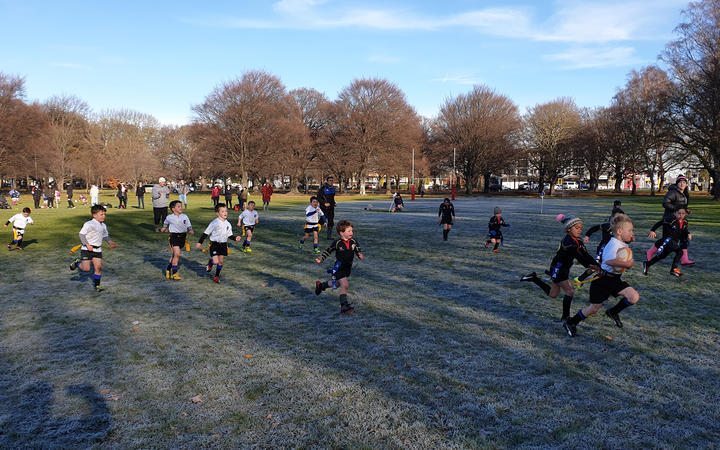 Children brave the cold in Hagley Park after the coldest night so far this winter in Christchurch. Photo: RNZ / Conan Young

MetService said it was slightly colder than the previous evening in the city, which got down to -4.8C.

But a clear day is forecast and it's predicted to get up to 14C, with tonight likely to stay at or just above freezing level.

Waiouru got down to -7.8C and Alexandra reached -6.1C overnight, MetService said.

❄️Does your garden look like this?❄️ Recent heavy frosts caused by cold temps and light winds can be hard on plants. The good news is as we move in to next week warmer northerly winds return. https://t.co/Yjbq0jxdqz ^TA pic.twitter.com/USULWzi3W4

It said the high over the country would slowly move away in the coming days, and northerly winds would return, along with a blanket of cloud that would make temperatures a little warmer in the evenings.

At 10am the frost was still hanging on in Hagley Park.

But it was not enough to put off junior rugby teams, some players seen wearing gloves, and their parents cheering them on from the sidelines.

"It's pretty cold alright. As you can see we're the only field here today still in the frost ... the coffee machine's not quite close enough," said Rod Parkinson.

Another braving the cold to show their support was Kevin Anderson.

"I was down at the netball courts at 8.30am and it was cold down there too. There's a fair bit of the white stuff hanging around but once the sun gets out I think we'll be right."

"Nice clear, not a cloud in the sky, lovely beautiful frosty Christchurch morning."