A mud pool which erupted in a residential area of Rotorua has tripled in size since it appeared earlier this week. 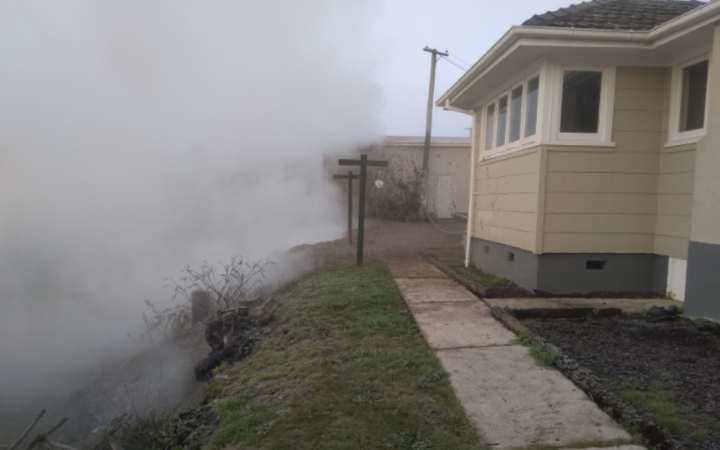 The pool appeared in a back garden in a Whakarewarewa home. Photo: Photo / Supplied

The pool, which appeared in a back garden in Susan Gedye's Whakarewarewa home, seems to be growing by the day.

Ms Gedye, who has been staying with family due to the unpredictable geothermal activity, returned home today to find a much larger cauldron of mud threatening her garden shed.

"The whole corner of the big double garage that's on the bank, it's like there's a big hole underneath that so it's kind of a matter of time before that will probably end up down the bank."

The Rotorua Lakes Council reaffirmed this, saying there had been more ground collapse since Wednesday and the mud pool was now bigger and had reached to just under the foundations of the property's garage.

There was also steam venting from the bank moving towards the house.

Power had been cut off and gas bottles on the property had been removed.

Yesterday, Ms Gedye told Checkpoint that locals had been frequently stopping by and looking at the pool.

GNS volcanologist Brad Scott told media at a briefing at the site this morning that he had seen two people throwing stones into the mudpool.

"That's human nature, you put fences up and people will climb over it to have a look."

"It's one of the things we've noticed over the years with geothermal features, if there's a spare stone around someone will pick it up and throw it in," he said.

The council was warning people not to do this.

Its geothermal inspector Peter Brownbridge said people should stay away from the house on Meade Street because it was too dangerous.

"If you want to come and and have a look, come down on to Tryon Street and don't cross the barriers, it's just too dangerous up the top."

"We have a bit of undermining and that hot mud is getting thrown further and further on to the property," he said.

Mr Brownbridge said the council's main objective was to make the area safe because with the ground continuing to collapse, the shed was in immediate danger of being swallowed up.

It wouldn't be practical to remove it so they were considering trying to get it demolished before it fell into the hole, he said.