KiwiRail already has plans to upgrade a Bay of Plenty level crossing where two people were killed yesterday morning. 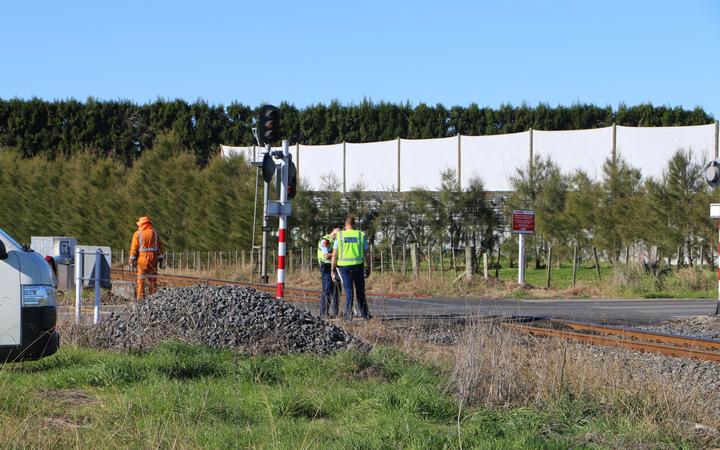 The site of the crash on Pongakawa School Road Photo: RNZ / Matthew Theunissen

Three others were injured when a car they were in collided with a train in Pongakawa just after 8am.

KiwiRail said the crossing already had flashing lights and bells - and half-barrier arms will be installed early next year.

It said several near misses had occurred at the crossing in the past decade, but no other collisions.

One of the injured is in a critical condition, and another serious, in Waikato Hospital.

The third is in a serious condition in Tauranga Hospital.

The Philippines Embassy has confirmed all killed and injured were Filipino citizens who were on their way to work at the time of the crash.

"We are coordinating with police and [the workers'] recruitment agencies and we're contacting their families back in the Philippines. We're not at liberty to give out their names and one of the embassy officers will go and see those who were injured ... in hospital," Mr Domingo said.

One man remains in a critical condition in Intensive Care while the other is serious but stable in High Dependency Unit.

The Bay of Plenty District Health Board said the third man, who was 27, was treated and discharged from Tauranga Hospital last night.

The five Filipino orchard workers had only arrived in New Zealand last week.

KiwiRail says the train driver was not injured and is receiving support.

An eyewitness to the fatal crash said the car was pushed about 4m and into a pole upon impact.

"I heard the crash, which made me look up, saw the car flying off the track and a jersey flew out, and the pole of the train lights just went down.

"I just went running out trying to find my phone and then panicked."

Ms Whitaker said some drivers took risks at the crossing and tried to get across while a train was approaching.

She said she had seen people in the past driving across when the lights are flashing and trains sound their horns.

Pongakawa man Troy O'Reilly said there was good visibility at the crossing, but the volume of traffic had been increasing.

The Transport Accident Investigation Commission is aware of the crash and the commissioner is seeking more information before deciding whether to investigate.