An eyewitness to the fatal crash between a car and a train in Bay of Plenty this morning says the car was pushed about 4m and into a pole upon impact.

Two people are dead and three are injured after a train and car collided in Pongakawa, Bay of Plenty this morning.

Police said the crash on Pongakawa School Road, off State Highway 2, was reported around 8:15am.

Fire and Emergency said five people were in the car when it was struck by a train at a level crossing.

Bay of Plenty District Health Board said a 27-year-old was in a serious condition in Tauranga hospital and a 29-year-old has been transferred to Waikato hospital from Tauranga.

A third person was airlifted to Waikato hospital and is in intensive care.

Two helicopters attended the scene along with ambulance crews. 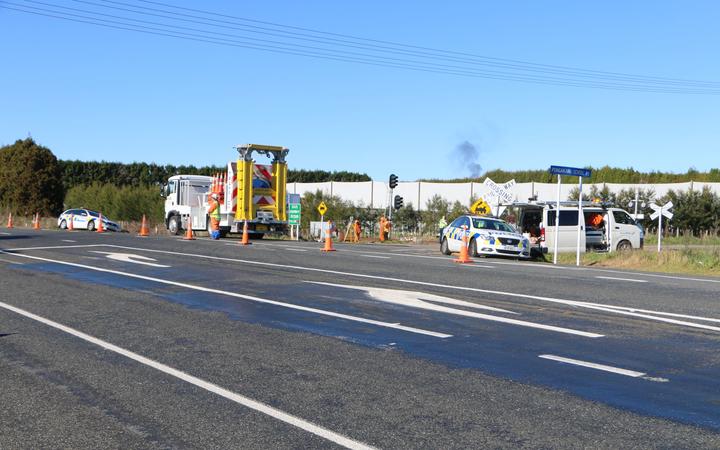 "I heard the crash, which made me look up, saw the car flying off the track and a jersey flew out, and the pole of the train lights just went down.

"I just went running out trying to find my phone and then panicked."

Ms Whitaker said some drivers took risks at the crossing and try to get across while a train is approaching.

She said she had seen people in the past driving across when the lights are flashing and trains sound their horns.

Pongakawa man Troy O'Reilly said there was good visibility at the crossing, but the volume of traffic had been increasing.

Pongakawa School confirmed none of its students or their immediate families were involved the crash.

The Transport Accident Investigation Commission is aware of the crash and the commissioner is seeking more information before deciding whether to investigate.

The road was closed and detours put in place, but SH2 through the Pongakawa area reopened.