A Dargaville woman is demanding answers after her husband went into hospital for pain relief and came out with brain damage. 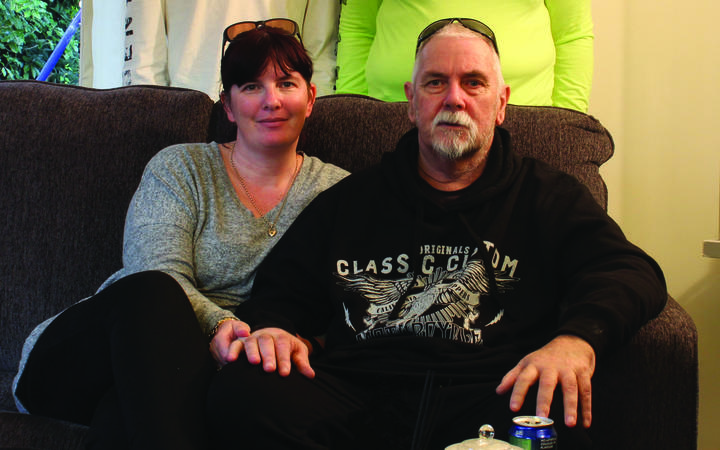 She has asked the Health and Disability Commissioner to investigate the incident at Auckland City Hospital in February, involving a suspected morphine overdose.

Her husband can no longer remember things like what year it is or how to use his TV remote control.

Kaipara builder Trevor Flood, 56, was admitted to the hospital on 12 February because of pain and dehydration, after completing a course of radiation therapy for throat cancer.

He had been struggling with inflammation of the gastro-intestinal wall, a common side effect of his treatment, which meant he had difficulty swallowing.

His wife Kylie Flood accompanied him to his ward, where he received morphine through a syringe driver, as well as several other controlled drugs, and was rehydrated with IV fluids.

She travelled back to her Kaipara home on 14 February to rest. However, the next morning she received a call telling her hospital staff were having problems waking her husband.

He had been rushed to an emergency ward. The diagnosis stated on his medical record was "opioid narcosis". His blood oxygen and consciousness levels had plummeted.

"When I arrived back to the hospital Trevor was confused and his speech was slurred," she told RNZ.

"Before I'd left he had been on a morphine drip and I remember seeing a nurse also coming every hour or so and injecting him.

"When I asked what had happened a staff member suggested there may be an issue with Trevor's kidneys, which created a morphine build-up in his system."

A medical report sent from an oncologist to Mr Flood's GP stated he had been given "significant amounts of subcutaneous morphine".

Mr Flood remained in hospital for another week, where he was given Naloxone, a drug that blocks the effects of morphine, including respiratory depression.

He was discharged on 26 February. Within weeks it became evident to his wife that the construction worker was a changed man, struggling to carry out normal functions.

"He couldn't work out how to operate the TV remote and or use his mobile phone properly," Mrs Flood said.

"More worryingly, I came home from work to find Trevor had gone out for a drive, parking in the neighbour's property when he returned, instead of our driveway, and he wasn't dressed properly."

Mr Flood's GP requested information from the hospital and promptly arranged an MRI scan in Whangarei. The results were sent to Mr Flood's oncology team in Auckland, where a follow-up appointment had been arranged before his discharge.

When the couple attended that appointment they were told brain changes had been detected and were then quizzed on whether Mr Flood was a cocaine user.

"We were repeatedly asked if Trevor was a cocaine user, or if he had ever suffered carbon monoxide poisoning. We told them 'no' on both counts," Mrs Flood said.

Regardless, clinical notes sent to the GP show the consultant recorded his belief the brain changes were "in keeping with possible hypoxic insult in the past (likely due to monoxide poisoning)".

Mrs Flood was told neither radiology or neurology specialists could find any obvious cause for his confusion and advised them to go to Whangarei Hospital or their GP if symptoms got worse. She said the morphine dose was not mentioned as a possible cause.

In April Mr Flood went to see an orthopaedic surgeon in Whangarei, about a previously-snapped femur bone, which needed treatment but had been put off until the end of his radiotherapy course.

The specialist, who did not want to be named, was so shocked by the mental changes in Mr Flood since their last meeting that he immediately referred him to Whangarei's neurology department for assessment.

In his letter of referral, he noted Mr Flood couldn't remember what year it was and came "to my clinic today with significant cognitive changes and memory loss, but no care with regard to co-ordination or diagnosis or management".

He told RNZ when he met the couple, he looked into the situation and found no information regarding follow-up care for Mr Flood, so took ownership himself. "I initially thought 'that can't be true'. I assumed it was just a matter of letters not being written up and sent, the process being slow, but I found nothing. There was no follow-up care arranged. I couldn't believe what was happening."

Late last month, a Whangarei neurologist stated his opinion to Mr Flood's GP that he had suffered brain damage due to recent "post-hypoxic" incident, where the brain was deprived of oxygen, while at Auckland Hospital.

In a clinical letter this month, he stated: "Trevor has clearly had a major brain insult. The temporal onset strongly suggests that this occurred at the time of his admission to DCCM and the subsequent scans are virtually pathognomonic of Delayed Hypoxic Leucoencephalopathy... Huge care implications, no mention of his cognitive status was made on the 21st, although he was seen by a neurologist. Kylie has been managing in what is really quite a dangerous situation, for example, she came home and found he had turned all the stove elements on."

Mrs Flood has requested the Health and Disability Commissioner investigate the matter, which she believes is a case of medical negligence.

"Local hospital staff were brilliant, as was my GP, they took ownership and fought for Trevor. Auckland was a different matter," she said.

"I want answers as to how this happened and why a Whangarei neurologist was able to diagnose his condition, but neurologists in Auckland couldn't."

"Specialists don't know if he will improve or get worse.

"He loved being active, he had fixed up a motorbike that he'll now never ride.

"He was planning to replace our roof, which won't be done. He won't be able to work any more."

She has lodged a claim with Accident Compensation Corporation (ACC) for financial help to look after her husband.

To complicate matters further, specialists say putting Mr Flood under general anaesthetic would now be too dangerous, meaning the surgery he needs to heal his broken femur bone isn't possible, leaving him hobbling around and further disabled.

"If the Auckland doctors had said to me, 'look, we'll refer you to an neurologist up in Whangarei to keep an eye on things', I probably wouldn't be so pissed, but it just feels like their attitude was, 'nah, nothing we did, off you go', and they didn't want to take any responsibility for what's happened," Mrs Flood said.

"I know they never intended to wreck Trevor's life, but afterwards they just left us hanging, really."

After being asked several questions by RNZ regarding the incident, Auckland District Health Board released a statement saying: "We are sorry to hear of this feedback. Patient safety and quality of care is our top priority. We encourage any patients who may have concerns about their care to contact us directly."