Wellington City Council, Victoria University and the New Zealand Symphony Orchestra have taken a major step in the establishment of a national music centre. 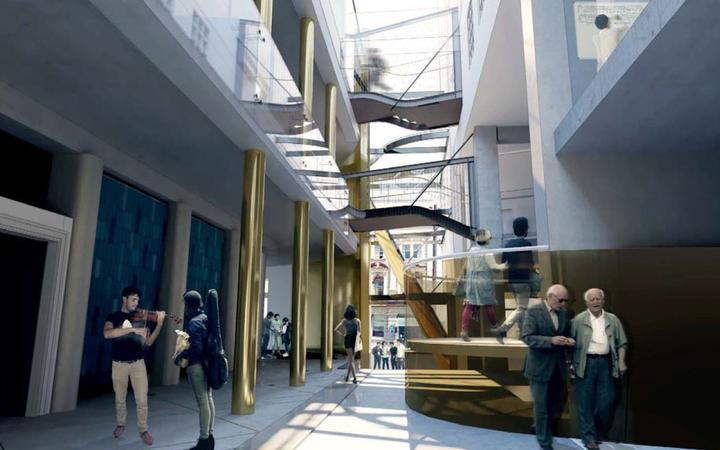 An artist's impression of how the Municipal Office Building could be incorporated into a new national music centre in Wellington. Photo: Supplied

The three parties have signed an agreement which will see the Municipal Office Building (MOB) become part of a national music centre to house the NZSO and the university's New Zealand School of Music - Te Kōkī (NZSM), along with a strengthened and refurbished Wellington Town Hall and the Michael Fowler Centre.

The MOB on civic square previously housed council staff, but it is now empty because of noise from the work on the Town Hall.

The precinct is also expected to include options for public access to music and the arts, lunchtime concerts, public lectures, workshops, seminars and art displays. It will also be home to Orchestra Wellington.

The city council will refurbish the Municipal Office Building and lease it to the national music centre for 25 years.

"This deal is a significant milestone in securing the future of MOB, which is a crucial part of Te Ngākau Civic Square," Wellington Mayor Justin Lester said.

"The national music centre will be home to some of New Zealand's best musicians and will inject their energy and talent into the central city."

Victoria University and the NZSO have launched a campaign to raise at least $30 million towards the fit-out of both the Wellington Town Hall and the MOB.

University vice-chancellor Professor Grant Guilford said so far the campaign has raised more than half the money it needs.

"We're very grateful to our leadership gift supporters, who have been so generous, and we look forward to working with others who share our vision.

"We believe the national music centre will provide a real uplift for music and music education in this country. The state-of-the-art teaching, rehearsal, research and performance spaces that it will offer will enable an outstanding education for the next generation of musicians."