A tsunami warning issued for coastal areas this morning was based on the best information at hand at the time, the Ministry of Civil Defence says. 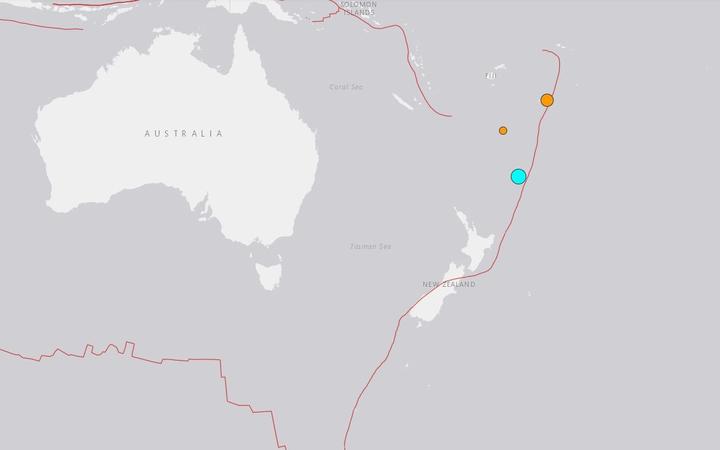 The earthquake hit near Raoul Island, about 10.55am. Photo: USGS

A magnitude 7 earthquake at 10km deep hit the Kermadec Islands region at 10.55am today.

At 11.08am the ministry issued a warning that the tsunami threat was being assessed, and that if a tsunami had been generated it could arrive in two hours.

Half an hour later, at 11.37am, the ministry issued a warning that there was a tsunami threat to beach and marine areas.

However, it cancelled that warning just eight minutes later, at 11.45am, saying there was no threat.

There is no tsunami threat to New Zealand following the M7.0 Kermadec Islands region earthquake. Based on current information, the initial assessment is that the earthquake is unlikely to have caused a tsunami that will pose a threat to NZ. https://t.co/ccVFYQQoBr

We have issued a BEACH and MARINE TSUNAMI WARNING following the M7.4 Kermadec Islands region earthquake

Ministry of Civil Defence and Emergency Management director Sarah Stuart-Black said the initial warning was based on information from GNS Science that it was a 7.4 magnitude earthquake at 10km deep, which would have been a significantly bigger earthquake than a magnitude 7 quake at the same depth.

She said they later received information from a gauge near Raoul Island, one of the Kermadec Islands, which confirmed that the wave that had been generated was less than 10cm high.

"Having that additional information from the gauge confirmed to us - along with the advice from the tsunami expert panel - that that risk was significantly reduced and at a very minor level, in which case we would not issue the warning for a marine and beach threat."

Ms Stuart-Black said that New Zealanders should always be ready to respond to an earthquake threat.

Seven Department of Conservation staff were on Raoul Island today during the earthquake.

A DOC spokesperson said they were all safe and accounted for, and there were no other contractors or visitors on the island.

The spokesperson said they were unsure of any damage on the island and staff would be assessing this.

Another large earthquake struck the area at 5.17pm, recorded by USGS with a magnitude of 6.3 at a depth of 35km.

Civil Defence said there were no concerns about that earthquake.

The Kermadec Islands Nature Reserve and Marine Reserve, located about 1000km northeast of New Zealand, is the most remote area managed by DOC and can only be visited with a special permit.