The DNA of ancient kelp has revealed Dunedin could be at risk from a large earthquake. 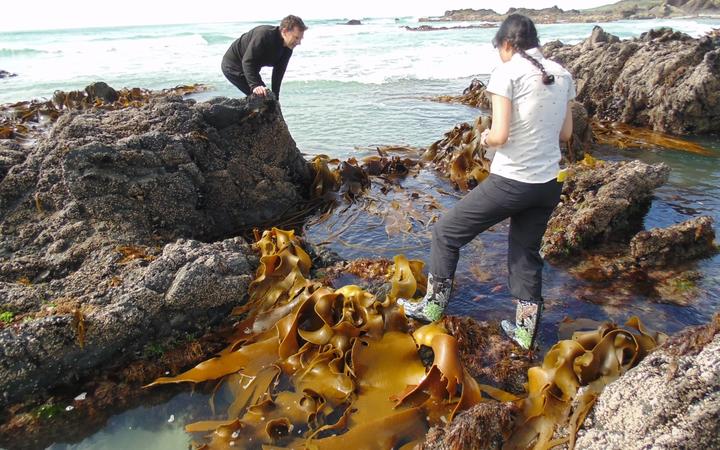 New research from the University of Otago showed that a quake similar in size to the 2016 Kaikōura quake, hit southern New Zealand about 1000 years ago.

Scientists said the pre-historic rupture of the Akatore Fault - just south of Dunedin - uplifted a large-stretch of the southeastern coast by two to three metres.

The size of the quake has in part been revealed by the work of PhD student, Elahe Parvizi who compared the DNA of modern kelp from the uplifted coast, with ancient kelp from either side of the raised region.

"We were astonished to find a modern DNA footprint of the ancient quake, with a clear genetic difference between kelp in the uplifted zone, versus stable populations outside the uplift zone," Miss Parvizi said.

The Marsden-funded research team, led by geologist Dave Craw, and biologist Jon Waters, combined geological and genetic data to assess the impacts of the ancient quake.

Professor Craw said the old Akatore earthquake would have been similar in magnitude to the 2016 Kaikōura quake, with tens of kilometres of rocky coast affected, and the old shore lifted out of the water, well beyond the reach of the waves.

Professor Waters said the Akatore Fault remained a bigger threat to Dunedin than the Alpine Fault, which runs the length of the South Island.

He said the discovery made through the kelp DNA was an exciting breakthrough in understanding the destructive power of an ancient earthquake.

"For us it's a new way to look at what's happened in the past. We got excited about this idea when Kaikōura happened - everyone saw those images of the uplifted kelp and the uplifted shellfish, all drying out in the sun and dying."

Professor Waters said New Zealand's tectonic history with lots of earthquakes in lots of different places was well known, but less so south of Dunedin.

"Down south of Dunedin, we've got this really active history of earthquakes as well. There's a good geological record that there was uplift in this area about 1000 years ago, and then again about 3000 years ago."

He said the landscape was solid proof, with old beach terraces and shorelines that were now high and dry.

Professor Waters said they were major events that represented a significant hazard for Dunedin.

He said while they knew quakes had happened in that zone, they did not know until now just how large, or that such events could leave such a lasting biological signature.

"We can use DNA to re-trace what happened in the past, so for us it's a new way we can look at the effects of geological history, or these earthquake histories in different parts of the world.

"It might be a really useful tool for looking at how things have changed in the past, maybe in regions where the geological record is not so clear," Professor Waters said.

The team now planned to use genetic approaches to shed new light on ancient earthquake events elsewhere in New Zealand and overseas.

Their findings have been recently published in the international research journal Earth and Planetary Science Letters.