What can you do if you purchase a building, your insurance is delayed, and then an earthquake strikes?

It turns out, not much.

That is the reality for one Kaikōura business owner, who's been left with a broken shop and a $50,000 repair bill almost two years on from the November 2016 earthquake.

Novel Findings owner, Jennifer Rush, purchased this building in late 2016 and went straight to her bank in September to organise insurance with IAG.

IAG returned with a list of required information, such as the age of the building, construction material, replacement value, details of new wiring, plumbing, and roofing work, as well as an engineers report.

But in Kaikōura, the smallest mainland district, getting all of that information was not easy before the earthquake.

"We don't have a structural engineer here in Kaikōura, the council was moving at the same time as me so a lot of their records were boxed up and I couldn't get access to those records," Ms Rush said.

"We don't have a registered valuer here in Kaikōura either, the closest we have is in Cheviot."

At the same time Ms Rush had to move everything in to the new building - without full insurance - as her lease had expired on her old shop.

"I did ask though in the interim if I could insure the building for the mortgage," she added. 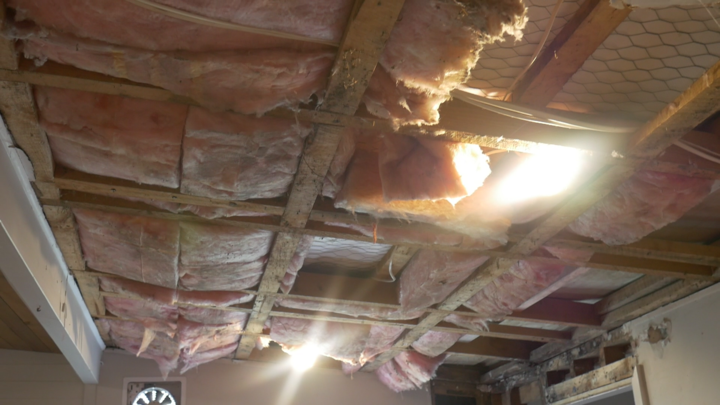 Jennifer Rush's broken ceiling at the back of her bookshop. Photo: RNZ/Logan Church

The November 2016 earthquake devastated the building.

"The tie rods which pretty much hold the walls together were... hugely damaged. There's thousands of external cracking, some walls had fallen in... the fireplace had broken," she said.

Ms Rush repaired the building enough to be able to open again last year, but there was still a $50,000 hole to fix everything else including the ceiling, the walls, and the plumbing.

"The impact of this stress is huge," she said.

And she blames IAG for leaving her in this lurch.

"I feel extremely let down by these guys, especially approaching them afterwards, there was no empathy, no understanding," she said.

In a statement, an IAG spokesperson said it would "strongly encourage" new customers seeking cover to allow as much time as possible to process their application, particularly in risk-prone areas such as Kaikōura.

"On September 16 2016, IAG sought responses from Jennifer Rush to a set of initial questions about the property in order to complete an assessment for commercial building insurance.

"We did not receive a reply until December 1," they said.

"IAG is sorry that Ms Rush was unable to provide the required information ahead of the Kaikōura earthquake."