A man addicted to pokie machines says it should be easier for local councils to remove them from the community.

The town of Ōtaki, north of Wellington, has 61 pokie machines but the number recommended by the council, and voted in through its bylaws, is 42.

Ōtaki man James, who did not want his last name used, has spent thousands of dollars over his lifetime playing the pokies.

Being self-employed, he was out and around town a lot and found it easy to pop into somewhere in Ōtaki and play.

"Ease of access to the pokie machines is definitely a trigger in terms of 'oh there's some machines right there so you can go play it'. It's a bit like having a McDonald's on every corner - you're more likely to buy McDonald's ... pretty simple really."

He could easily play for six hours at a time and it was not unusual to stay all day and into the night.

He said unlike policing alcohol consumption at a pub, the staff rarely checked in on him.

"Someone who's had too much to drink it's illegal to actually serve them any more alcohol, but someone who keeps gambling his life savings away - it's not illegal to stop them doing it. So that's the crutch of that really."

The Kāpiti Coast District Council's bylaw states that Ōtaki should only have 42 machines, it has been that way since 2011.

The policy was based on a sinking lid model which means no new machines can be set up and if any of the locations hosting machines shut down, there are strict rules around relocating them.

James is a client of Andrew Brown, a counsellor at the Problem Gambling Foundation. 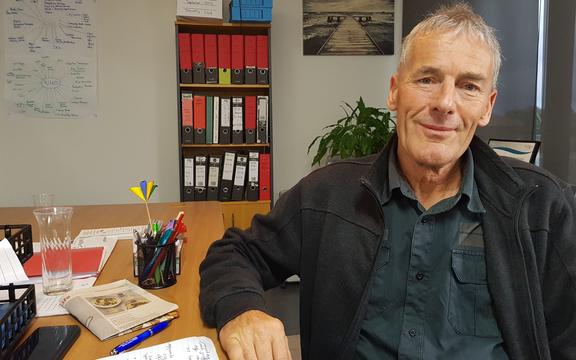 Mr Brown said the council's sinking lid policy was the best option there was, but admitted it was a waiting game.

He said the machines were obviously profitable so he could not see why they would voluntarily be removed.

"With the number of machines there it must be economically viable. It must be that those machines are all doing what they're designed to do, which is to take money."

The food bank has about 230 regulars - about 60 percent are pokie users.

"It's money that should be food on the table but people just get addicted to these machines and there it goes, it's really a tragedy."

"We're the most vulnerable area on the Kāpiti Coast, we've got families that are at risk in that respect and it has to be addressed."

Mayor K Gurunathan said pokie machines were difficult to manage and the sinking lid policy and cracking down on relocations of machines was the best it could do.

He would like to see more money go directly back to the community it was taken from.

"We've got 192 pokie machines in Kāpiti. Between October 2017 and September 2018, the amount of money they took from these machines was $8.75 million, and the return to Kāpiti community organisations was $710,000 which amounts to 6.8 percent return."

He said efforts to improve this were under way.

Last month, as part of its review of its gambling bylaw, the council floated a proposal to further drop the cap in Ōtaki to 32 - meaning the town would have double the amount of pokies deemed appropriate.

The proposal didn't go through, essentially because it would have been pointless.

During the review period the council received 58 submissions - 27 from Ōtaki almost all of which were to do with the negative effect pokie machines had on the community.

A spokesperson for the Department of Internal Affairs said there was nothing in the Gambling Act that let a local community decide whether or not machines should continue to operate in an area.

"The government's supposed to supervise it but they only do it to a limited amount I feel and then they pass it to the council and the council has their bylaws but there's no one who stands up and controls it ... they can blame each other then.

"No one really stands up and says 'that's a good idea, let's reduce it'."