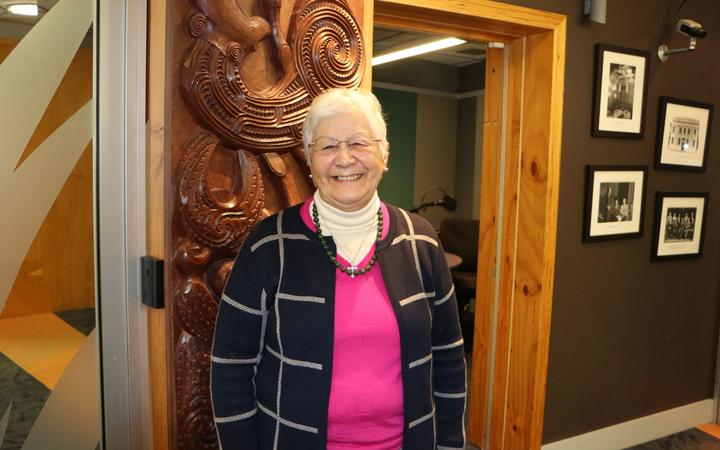 Dame Areta was also a member of the Waitangi Tribunal, served on the Māori Council and the Human Rights Commission, and is being honoured for her services to Māori.

From her humble beginnings in the East Coast, growing up on a farm at Whāngārā, she said her upbringing was very much influenced by Sir Āpirana Ngata.

The prominent leader and politician decided Māori land needed to be conglomerated, so he formed the incorporations and the Māori trust boards, she said.

"By going into the incorporation it meant that we would have nowhere to live because the farm would then be farmed as a whole, so it was the family within the hapū, not just our family, that owned that farm.

"The planning in those days, the late twenties and early thirties, was that we would have to have a marae and we needed a church. You've got the marae at the end to take care of our tikanga, and you've got the church in the middle of the village that took care of our wairua."

Her whānau still own the farm today.

Dame Areta said among her greatest achievements was seeing the establishment of the Māori language nests for children, kōhanga reo.

She was called a radical in the 5th Form when she told her principal she wanted to learn te reo Māori at school.

"It wasn't in the high schools at that time. We were four or five Māori girls in senior school, and we were learning French. I was envious of my Coast relations who spoke Māori," she said.

"We thought it would be a good idea if we learnt te reo Māori instead of French, and I approached the principal about that. But for her saving grace, I must say, as the principal she did follow it through. We were the first group that took Māori in high school in Gisborne by correspondence."

Dame Areta was the president of the Māori Women's Welfare League from 1993 to 1996, having previously served as an area representative.

On the executive board, she witnessed the then prime minister Robert Muldoon agree to the establishment of kōhanga reo.

"We were arguing to have the kōhanga reo movement started instead of play centre, or beside play centre ... I was gathered with many of our Māori elders that night at Parliament when the prime minister, Mr Muldoon, agreed that we could have kōhanga reo, and we just celebrated.

"In the morning we heard how many down the road were now operating because they had been practising before that date."

As the international president of the league she met Queen Elizabeth at the Coronation dinner for Te Ariki Te Paeru Dame Te Atairangikaahu at Ngaruawahia.

"That was just an amazing day for Māori women but what I found was that the queens together, it was so neat to see our queen hosting the Queen of England ... she made it look as if they were together, but she knew she was being hosted and our queen played that part really well. It was a memorable day."

On another occasion, Dame Areta remembered getting a ride home from the Māori Queen.

"We went to an event at Parliament and she said to me, 'oh we'll give you a ride home if you like'. Just off-handedly I invited her in for a cup of tea and to my horror, she said, 'oh thank you very much, I'll come'.

"As as we were sitting there she looked up on the wall and saw her aunt, Princess Te Puea, who was the first patron of the league, and she said, 'do you know this is the first time I have been in this house?' I couldn't believe it."

Dame Areta was a member of the Waitangi Tribunal where she served for more than a decade to 2008. She was also a Human Rights Commissioner (1996-2001), a marriage and family court counsellor, a mediator, and a wife and mother.

Today she serves on the Māori Women's Development committee, which lends money to Māori women to go into business.

She also looks after three mokopuna, driving them to and from school and taking them to sporting activities.

And as a kaumatua, she had just one message for the next generation.

"Carry on learning our language, it's so good and I need you to know our world and not leave it behind. Just remember the strength that you can have from the Pākehā world beside your own world. They help to fill and strengthen your kete.