A man described by his grandfather as a dangerous white supremacist will remain behind bars after two appearances in Christchurch District Court today. 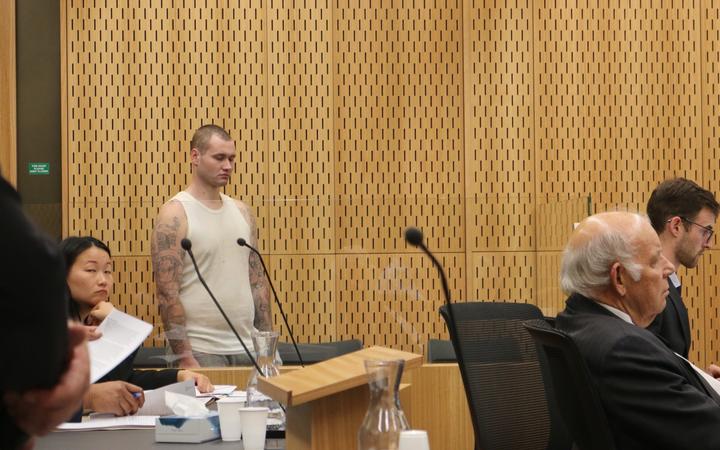 Frank Finch, 22, will be imprisoned for crimes including theft and unlawfully getting into a motor vehicle, but the police have also laid an additional charge of threatening to kill, for which he appeared in the afternoon and will enter pleas on next month.

Ahead of this morning's sentencing Finch's grandfather, Rod Finch, had voiced concerns that his grandson could kill someone if released from prison because he holds white supremacist beliefs, was a member of a gang and had expressed a willingness to kill.

Having served just under six months on remand in prison already, it was possible he could have been released today - but he wasn't. Judge Anthony Couch jailed him for 14 months, meaning Finch will serve at least another two months in prison.

Citing psychiatric reports, Judge Anthony Couch said Finch clearly had no remorse and was likely to reoffend if released.

"The conclusion of the psychiatrist is that you lack motivation to make meaningful change in your life or to take any steps to avoid further offending. The psychiatrist also complains that you didn't need extensive and long term support in a highly structured environment to gain the skills to even consider pursuing a viable life outside of prison," he said.

Finch's lawyer Allister Davis had asked for a sentence of intensive supervision, and speaking after the sentencing, he said the jail term was a missed opportunity.

"But that opportunity may arise again in the future. At the moment, we've got a young man with some pretty serious psychological problems and issues that's in jail. I don't believe that it's helping him at all, but he's done the crime has got to do the time I suppose," he said.

Finch's grandfather was also at court today, and said the additional charge of threatening to kill, laid by police last night, came as a surprise. But Rod Finch felt today's proceedings were a step in the right direction.

"Last Friday, there was nothing in place to support Frank on his potential release today, so at least we've got a proposed program, which I believe will, over time, get Frank back into the community as a law-abiding contributor to society - and that's all he wants."

He said he is happy he spoke out about his concerns that his grandson could kill someone, and hopeful there may be future opportunities for Frank to turn his life around and reintegrate safely into society.

"He's intelligent, and he he knows where his weaknesses are. But how do you support a person? There need to be a structure where he's going to get that support."

Nevertheless he said it took a lot of time and effort before his concerns were heard, and it took help from Scott Guthrie of the Transforming Justice Foundation.

Mr Guthrie still had concerns about Finch re-offending once he was released.

"I think that we've done enough now for Corrections to be fully aware ... to be behind Frank when ... he does get released, it won't be into the mainstream community. It'll be a slow and sure release to make sure he is ready to go back into the community," he said.

Mr Guthrie said it should not have taken the work of Rod Finch and a volunteer such as himself to get Corrections to sit up and pay attention.

He said Frank Finch is a drug addict and there needed to be more money spent on drug and alcohol counselling for prisoners.

"Then also, once the prisons are released, they just drop them to the community with a cheap $300 and a big pocket. They've got very little support. There's not enough money within corrections to support these people when they come into the community."

At his second appearance this afternoon, Frank Finch was remanded in custody, and in three weeks he is expected to enter a plea.