A person has died and another has been critically injured in a car crash on in Coromandel, while a young family has been rescued from being trapped in a car near Hawke's Bay. 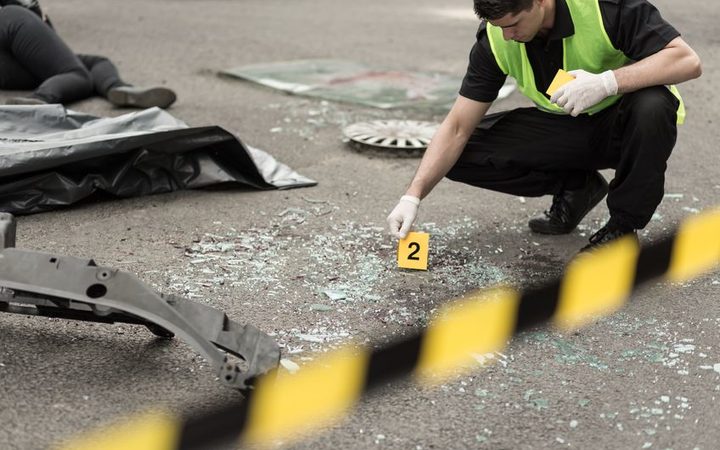 A policeman inspects a road after a crash. Photo: 123RF

The deadly single-car crash happened about 12.30pm on State Highway 25 near Pukepoto, just after the turnoff to Pāuanui.

The road - the only one running up the east coast of Coromandel Peninsula - was closed until about 9pm.

They said anyone heading to Tairua or further north to Hahei, Cooks Beach or Whitianga would have to take a detour on the western side of the peninsula, through Coromandel township.

Meanwhile, a couple and their baby have been winched to safety 12 hours after they went off the road on State Highway 5, near Waipunga Falls last night.

The crash on the road between Taupō and Napier went unnoticed and the young family remained trapped down a bank overnight until the man managed to climb the bank and seek help this morning.

Fire services abseiled down to the family and a helicopter winched people to safety.

Senior Constable Dave Wells from Taupō said no one was seriously injured.

The Transport Agency is warning drivers heading away for the weekend to prepare for congestion and poor conditions, and allow for extra time to avoid frustration.

Traffic is heavy around the country and rain, wind and snow are expected in some parts.

Wet and blustery conditions are forecast for the central North Island, and snow is expected down to three or 400 hundred metres in the Kaikōura Ranges in the south.

Monday is also stock moving day for farmers, so there may be delays on rural roads.