A South Auckland community desperate for healthy food options is taking matters into its own hands. 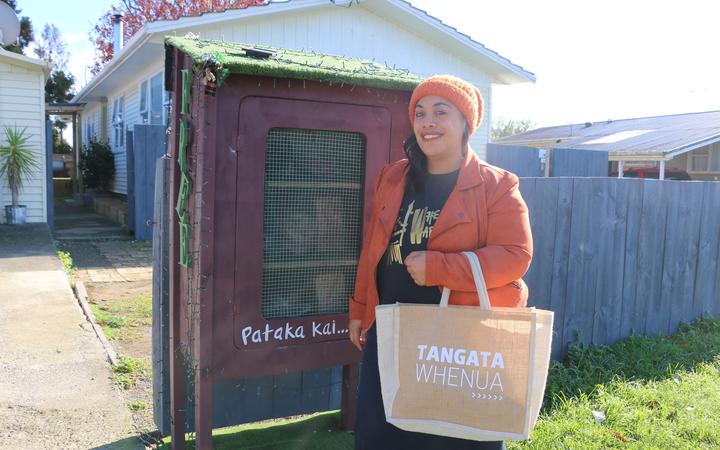 Longtime Ōtara resident Swanie Nelson first started the Pātaka Kai movement last August, where she set up a pantry outside her house and anyone could donate or take food from it.

Decked out with fairy lights and a slick grass turf on the top, the pantry has come a long way since it first started out.

It is still a humble little outdoor pantry but it has come to mean so much more, with nearly 110 pantries just like it across the country.

"I would never ever have imagined that would have happened in such a short space of time," she said.

"It's quite bittersweet, it's bitter because it reflected how bad it's been for families and how much communities are needing quicker and easier access to food and on the sweet side it's really brought communities together and neighbours together."

What were people actually eating?

"So if you're very familiar with Ōtara and the town centre, it's very difficult to find good food, healthy food options," she said.

"We really wanted to look at how we can improve access to good food, fresh fruit and vegetables and also enable a space within the town centre that could act as a beacon of light in regards to health and wellbeing."

The solution is creating their own not-for-profit nutritious food village in the Ōtara town centre.

A 40-foot container, donated by Panuku Development, is being converted into what Ms Nelson calls a micro-mart where fresh produce, healthy food and coffee will be sold at low prices.

She is looking to partner with different community groups to grow fruit and vegetables to then supply to the hub.

"Any funds that do come back through that space will be used to sustain the project and also create social outcomes," she said.

"It could be simple as running cooking classes or teaching people to use the urban garden."

Ms Nelson is also in the process of creating a new app, called Kai Nation.

The idea behind it is to allow people to share with others what food they have in real time.

Ms Nelson said that will cut food waste and connect people with what they need.

"They want to see good shops here in Ōtara - there are some options here but we also know there's KFC coming here which absolutely doesn't help."

The arrival of the fast-food chain KFC in the area was also a concern to social worker Rocky Misiepo.

"If you research and figure out the numbers in terms of how high the diabetes rates are here in Ōtara - they're quite high," he said.

"I see a lot of people come in [to health services] and getting their blood checked, dialysis, diabetes, it's just adding insult to injury."

Mr Misiepo said there was a serious need for better food options.

The community hope to have a healthy hub up and running by late this year.