The Zero Carbon bill passed its first reading in Parliament on Tuesday, 119-1, and on Thursday opened for submissions.

The Climate Change Response (Zero Carbon) Amendment Bill's slow progress since the Labour-led coalition entered Parliament in 2017 has been criticised and so has the substance of it - by environmentalists and farmers alike.

Just before the election, law student Sarah Thomson took the National government to court over its inaction on the climate emergency. The case was dismissed.

Now, Ms Thomson - who is now a lawyer at a community law centre in Auckland and advocates for climate action at a local government level - has said it was a "relief that after 18 months a Zero Carbon Act is finally in sight".

However, she said it seemed the government saw the bill as a substitute for real action.

"It is very hard to allay my worry about the future, even with the bill progressing through Parliament," she said.

"I think a lot of young people who understand the crisis we're in, both in terms of climate change and the ecological crisis, feel anxiety about the future and that's pretty hard to shake off. All we can do is try to turn that anxiety into action, and do our best to push for change."

When the bill was revealed, Greenpeace executive director Russel Norman said it had bark but no bite.

"The bill sends some good signals until you get to the section at the end that negates everything else you've just read," he said.

"This section states there is no remedy or relief for failure to meet the 2050 target, meaning there's no legal compulsion for anyone to take any notice.

"The most anyone can do is get a court to make a 'declaration' that the government isn't achieving its climate goals, but this declaration doesn't make the government actually do anything." 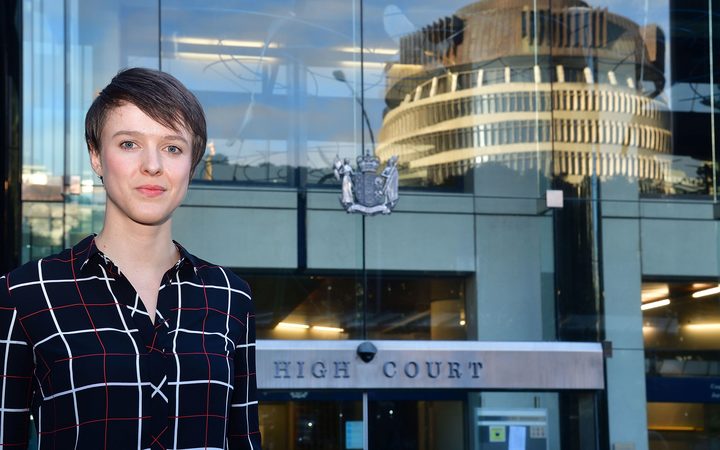 Sarah Thomson during the climate change case at the High Court in Wellington in June 2017. Photo: Supplied / Sarah Thomson

"It is disappointing that the bill limits meaningful legal action, which could keep the government accountable. As the bill stands, if the government fails to reach the 2050 target or an emission budget, the only recourse the public has is to ask the courts to make a declaration. "

It went further than that, she said.

"The bill essentially blocks an application for judicial review where a minister or other person or body makes a decision and fails to consider its impact on the 2050 target or an emissions budget.

"This is the case even where consideration of the 2050 target or budget should be compulsory, for example, when deciding whether or not to open a new coal mine.

"If we're serious about creating an effective framework which keeps future governments accountable, these clauses need to change, or simply be deleted."

However, the bill didn't appear to prevent a judicial review of the setting of targets or budgets, or close the door to other types of legal claims like one based on negligence or the Bill of Rights, such as the right to life, she said.

Although Ms Thomson's case against the National government didn't succeed, there were important findings within the case that would provide a foundation for future litigation, she said.

"For example, my case confirmed that, when it comes to judicial review, climate change is not off limits to the courts. The government had argued that the courts aren't equipped to deal with complex 'policy' issues like climate change, and parliament should have full discretion in deciding how we respond to the problem.

"However, [Justice Jillian Mallon] disagreed. She held that the importance of the matter warrants scrutiny by courts, in addition to accountability through parliament and elections."

Ms Thomson said the bill set a clear direction and provided structure and timeframes and most importantly, provided for an independent body of experts to give recommendations on carbon budgets and policy.

But she wanted greater separation between politics and the setting of emissions budgets and targets.

"I agree with Russell Norman that the bill needs some teeth - at the very least it should allow for greater accountability through the courts, although we should explore other options for enforcement, too.

"I think we need to tighten constraints on the use of international credits because, as it stands, there's still a lot of wriggle room for lack of ambition. Also, if we are going to be soft on methane targets, then we should seriously consider requiring a more rapid reduction in CO2 emissions."

She also said the bill should "recognise New Zealand's role as a developed country and climate leader under the Paris Agreement.

"The explanatory notes set out an ambitious vision around leadership, but this is yet to be translated into the bill itself. We might be small, but there is a lot to be said for setting an example to the rest of the world.

Submissions on the bill are open until 16 July.

"Now is not the time to be complacent, but to start writing submissions and go out onto the streets - which is what the school students will be doing this Friday."