One person is in a stable condition and one has been discharged from Starship Hospital following a police pursuit in the Auckland suburb of Te Atatu last night. 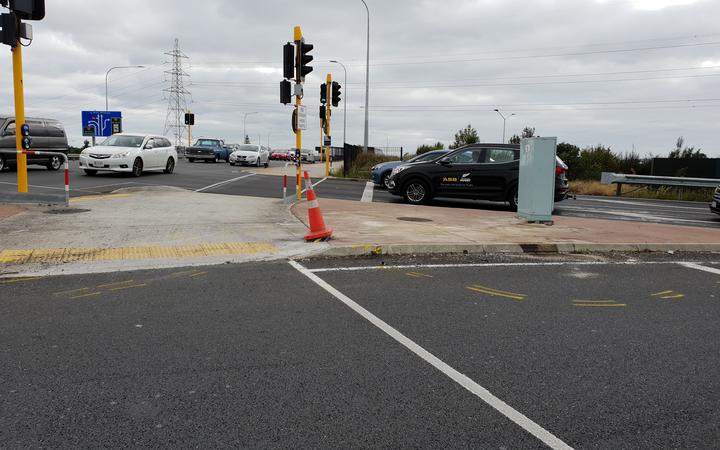 The scene of the crash following a police pursuit in the Auckland suburb of Te Atatu last night. Photo: RNZ / Liu Chen

The pursuit began shortly before 12am, and ended three minutes later when the stolen car slammed into a traffic light.

The latest incident has renewed calls from youth advocates for police to stop pursuing young drivers unless absolutely necessary.

Lynne Hall, who lives around the corner from where the accident happened, told RNZ: "I heard this almighty thump ... a really loud one and I thought 'oh that's something horrible, they've got some lamppost or something'."

The crash has led to renewed calls for police to review their pursuit policy.

Human Rights Lawyer, Deborah Manning, said New Zealand's policy was out of touch with international practice and that there needed to be an urgent review.

While that happened, police should cease pursuing young drivers unless they had committed a serious offence, she said.

"We all know that young people's brains haven't developed properly, so we just say again that New Zealand Police needs to review its pursuit policy to stop these chases and crashes and deaths of our young people."

In the past two years more than 980 young drivers have been pursued by police and four have been killed.

Children's Commissioner Judge Andrew Becroft said unless there was a threat of homicide or serious injury, police should not pursue young drivers.

In most cases, police could locate and hold the offenders to account the next day - rather than initiating a dangerous chase, he said.

"The problem is that young people with very poor judgement skills and a still-developing frontal lobe are prone to making fool-hardy reckless decisions that can backfire very quickly and sometimes the whole point of the exercise is to lure the police into a pursuit."

But the head of the Police Association, Chris Cahill, said that may not be practical because it was difficult for police to ascertain the age of the driver and who they were.

He said while there needed to be more training for police involved in pursuits, the policy did not need to be reviewed.

"We would really fall back on the large-scale thematic review that police and the Independent Police Conduct Authority did earlier this year, which while having some recommendations for change, extensively said the pursuit policy was appropriate, and that really is something is something that we think is true," he said.

In a statement, police said they were in the early stages of researching why young drivers fled, and said they looked forward to working with other agencies on the matter.

"We recognise this is not just a police issue. It comes down to family, community, and the other agencies involved with young people.

"Once we have robust information about the motivations, the next step will be working together with other groups on ways to influence young people's thinking, so we see fewer of them making the wrong choices when they're behind the wheel."