A man has been fined for taking a motorised chilly bin for spin after drinking, but has avoided being disqualified. 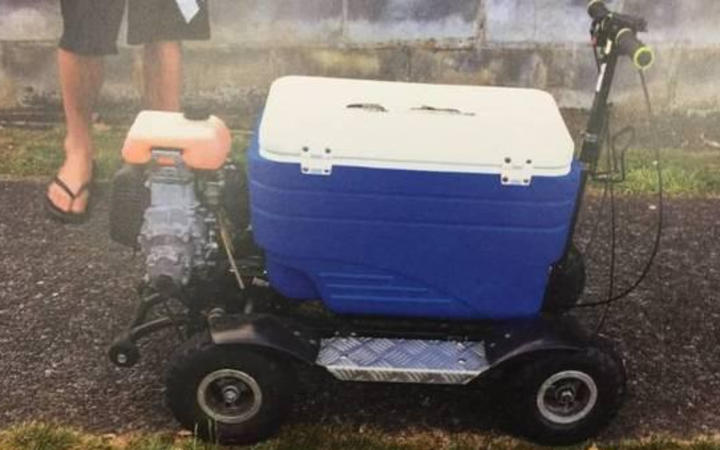 The motorised chilly bin Daniel Hurley took for a spin after a few drinks last year has netted him a conviction and a $700 fine. Photo: Supplied / New Zealand Police

Its top speed is 12km/h, and is probably less dangerous than an electric scooter.

But the motorised chilly bin a Cromwell man took for a spin after drinking last year has netted him a conviction and a $700 fine.

Daniel William Hurley, 24, was charged with drink-driving after his joyride in Cromwell on 20 October.

Hurley had been drinking with friends and had a breath-alcohol reading of 540mcg when he rode the motorised chilly bin in a car park outside a Cromwell bar.

But he was noticed by a passing police patrol car and discussions over whether the motorised chilly bin would be termed a motor vehicle under the Land Transport Act began.

The answer was yes, but Judge Michael Turner conceded in the Alexandra District Court yesterday Hurley's offending had been ''at the lower end of the spectrum'', and an e-scooter was ''probably more dangerous''.

The top speed of the motorised chilly bin was 12km/h, whereas an e-scooter could go almost 30km/h but was not classified as a motor vehicle, the court was told.

Judge Turner found there were legal reasons why Hurley did not have to be disqualified for his offending, but convicted him and fined him $700 and $130 in court costs.

There had been only two other cases in New Zealand of a person being convicted of drink-driving on a motorised chilly bin, Judge Turner said.

Both had also avoided disqualification.