The family of a man killed by pirates off the coast of Panama five days ago are at last able to retrieve some of their belongings from their yacht. 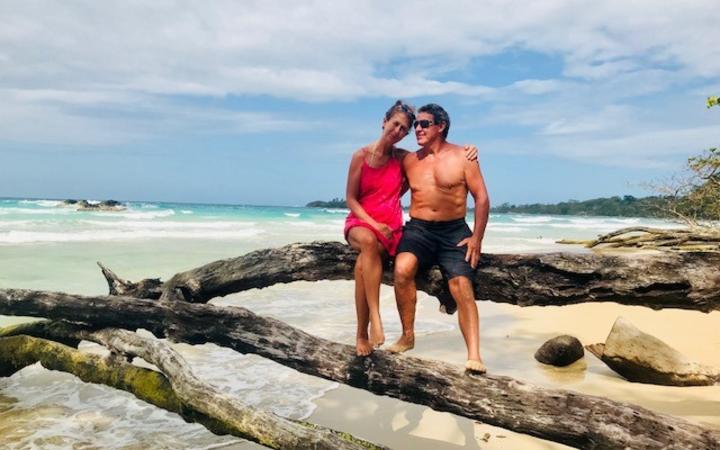 Alan Culverwell, 60, was killed and his wife and young daughter injured in the attack on the vessel on May 2.

The family had been travelling on the yacht for the past two years and were making their way back to New Zealand, via the Panama Canal, at the time.

Mr Culverwell's sister, Derryn Hughes, said the family were still waiting for authorities to give them the go-ahead to return to New Zealand.

But at last they're able to access the boat, to lay flowers and retrieve their belongings.

"Just to show you how supportive the Panamanian people have been, there were no florists open so they actually contacted one of the florist owners who came in and opened up so that they could sell them some flowers to enable them to do this on behalf of mum and dad back in New Zealand," she said.

"Part of what today is about is getting access to the boat and taking off their personal effects that they need to take with them. Some dear friends of theirs took the two children out the other day and bought them new outfits because literally they'd been living in the clothes that they had on."

Mr Culverwell's wife, who's also called Derryn, received a deep machete wound to her upper arm and shoulder during the attack and required 36 stitches, both internal and external.

His 11-year-old daughter suffered blows to her head and arm, thought to be from the machete handle.

"They're both very brave young children. And we just can't thank Derryn [Culverwell] enough for her strength and what she did. She's just an incredible woman," said Ms Hughes, adding she believed her actions saved the children's lives.

The family want to go home but due to the ongoing investigation and court process, they have to stay in Panama City for the time being in case they're needed.

They also need to figure out what's going to happen to their boat, the Aqua Lobo.

They've got five New Zealanders with them offering support - friends, family and a consular staff member.

A GoFundMe page set up to help the family get back to New Zealand and to bring Mr Culverwell's body home has now raised over $25,000.

"It's amazing, especially in the wake of Christchurch that people are giving to the family," Ms Hughes said.

"So, financially, we will make this happen. Alan needs to come home. For all his family."

Three people, including a minor, have been arrested and charged over his death.

In a television broadcast last week, Panama President Juan Carlos Varela apologised to the Culverwell family and vowed that the attackers would pay for their crimes.