A Taranaki pensioner fears he will never sell his home - and his children will miss out on their inheritance - unless a rock wall at the coastal settlement where he lives is extended. 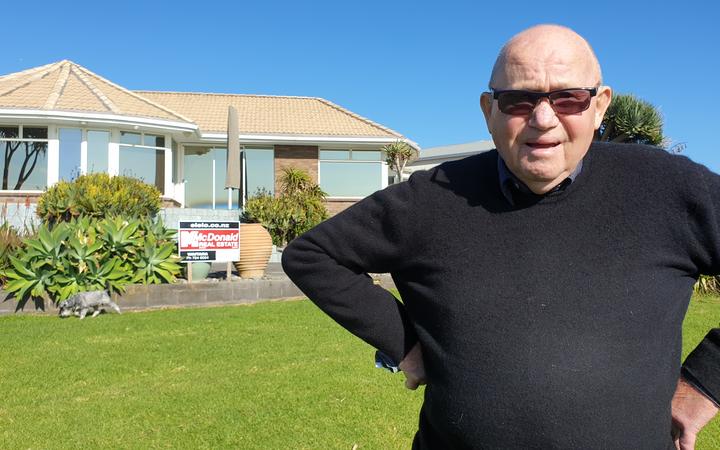 New council assessments of the erosion risk at Onaero reveal George Corlett's home could be swallowed by the ocean in as little as 20 years.

The 79-year-old no longer lives in his cliff-top property with its panoramic views over the Tasman Sea. Instead he and his wife - who is in poor health - live in a New Plymouth rest home.

Mr Corlett said there had been plenty of interest in their beachfront home 27 kilometres north of New Plymouth - but there was a catch.

"Yeah, well that's our up there with a sign up that it's for sale. We've had it for sale for two years and we keep reducing the price, but the banks see the red line and they don't want to lend."

The red line Mr Corlett referred to was the coastal erosion hazard area in the New Plymouth district plan.

He said when he bought the property 30 years ago it was pitched as having a 100-year lifespan.

Mr Corlett was not happy with the New Plymouth District Council's handling of the erosion issue.

"It's been terrible. I'll just leave it at that." 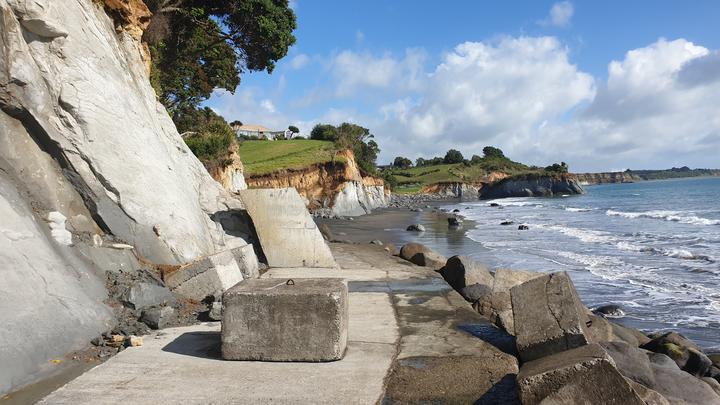 Some of the coastal protection in place at the Onaero beachfront. Photo: RNZ / Robin Martin

"Who's going to buy our home if we decide we want to sell it or need to sell it? Who's going to lend money to someone who wants to buy here if this red line is going through our properties?"

The council has just reassessed its coastal hazard area and recently briefed Onaero residents of its findings on a walk-and-talk tour of the beach.

Tonkin and Taylor coastal engineer, Tom Shand, who did the science behind the review, told them a council-built seawall at the western end of the beach had erosion under control.

But the news was not so good for Mr Corlett and his neighbours to the east, where property values range from $750,000 to $1 million.

"Where we are standing now will eventually slump in five or 10 years. The cliff toe below up with continue to move inland at point one, point two, point three metres a year and this land up the top here will be gradually be eaten back in until it gets pretty close to that house over there, which is probably 40m from the cliff toe at the moment.

Dr Shand said without a seawall, Mr Corlett's home could fall into the sea in 20 to 50 years. 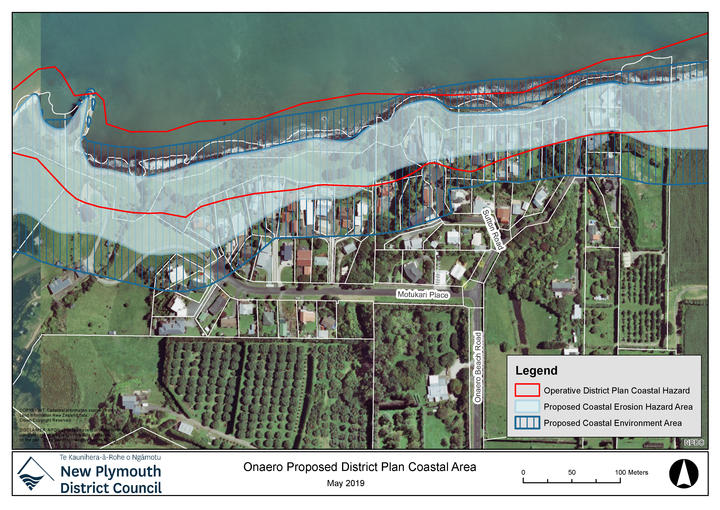 Another neighbour, Tom Burrell, said homeowners had been told the council would step in if erosion became a problem.

"What the people buying the sections at the time were told was that there was a line that when erosion got to that that action would be taken.

"Most people bought properties here with the knowledge they would last for 100 years and there would be mitigation put in place to ensure that happened."

And therein lies the rub.

The council has consents to build a seawall, but is refusing to do so. 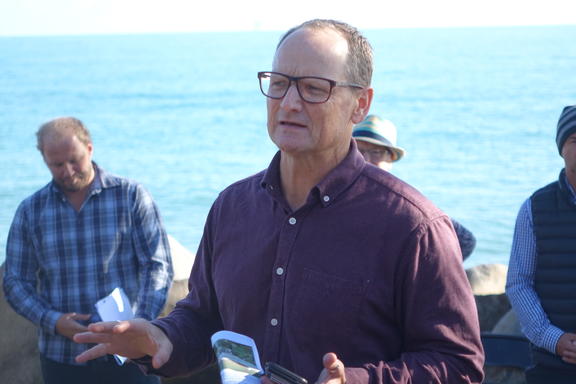 Its group manager of strategy, Liam Hodgetts, did not sugar coat the situation.

"Well, the council's position for a seawall at Onaero is that it won't be building one. It's not considered to be a strategic public asset and of course that's the concern of the residents. The opportunity here is to provide the opportunity for this community to organise itself and fund its own private seawall."

But Onaero foreshore committee chairman, Frank Kerslake, said the land in front of the affected homes was a council reserve and in the eyes of residents, a strategic public asset.

Mr Kerslake also took umbrage that the council not only wanted the homeowners to pay for the $750,000 seawall, it wanted them to take over the consents making them responsible for the wall long term.

He said that was a step too far for the residents who had been willing to dip into their own back pockets.

"It's not our land. We'd be buying rocks to put on somebody else's land. Also there's the long term liability of it all. None of us out here are young and we certainly don't want locked in our titles that we have to look after a rock wall for ever and a day."

"Well it's a simple thing. We had a design done, we've got consents in place and really the intention was to complete the wall so we just need the council's support and we'll complete the wall and the erosion will stop and the reserve will be saved."

Across 120km of New Plymouth coastline about 600 properties now fall into the proposed coastal erosion hazard area, up from 350.

If approved, they would have to comply with stricter resource consents and building regulations.

Another 1500 were now in a coastal environment area at risk in the worst case sea rise scenarios over 100 years.

The draft district plan will be publicly notified later this year.