A scaffolding company has been fined $150,000 after a poorly-designed scaffold collapsed while seven people were working on it. 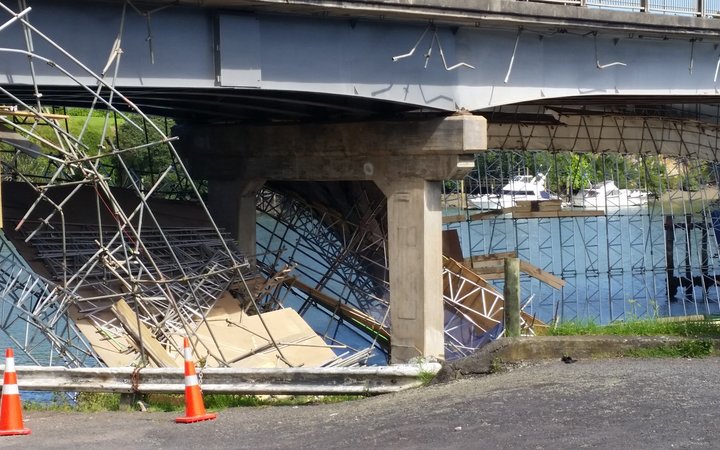 The collapsed scaffolding beneath the bridge. Photo: RNZ / Laura Tupou

Affordable Scaffolding was sentenced at the Auckland District Court last month over the 2017 incident, in which the scaffold erected under the Panmure Bridge collapsed.

Six workers fell into the water and another was trapped on the scaffolding. No-one was seriously injured.

A WorkSafe investigation determined the collapse occurred due to overloading.

Head of specialist interventions Simon Humphries said the incident could have had "catastrophic" consequences.

"It is extremely fortunate that all seven workers escaped without serious injuries," he said.

"This incident highlights the requirement for every scaffolding company to ensure structural design, engineering review and adherence to standards and guidance material."

The company was also ordered to pay $12,000 reparation.

Speaking to RNZ shortly after the February 2017 incident, local business owner Roger Hill said he was about 30m away when he saw the north side of the scaffolding fold and fall into the river this morning.

The workers, who were sent plummeting into the water, were lucky not to be killed or seriously injured, he said.

"They were sliding down and falling off, it was quite amazing."

The scene looked a horrendous mess, with huge piles of scaffolding and sheets of plywood in the water, he said.

The workers were wearing life jackets, he said.

"It looks like a kid's job and not done properly at all ... You can tell who ever did the right side has just rushed it and then it's collapsed, forcing the other side to fall."

Another man at the scene, who works with concrete, said he had admired the scaffolding's design and how safe it looked when it was unwrapped last week.