The imposing grey building on Richmond Rd is surrounded by barbed wire and broken beer bottles and it's windows have all been boarded up - except those smashed out by vandals, homeless people or perhaps ghost hunters. 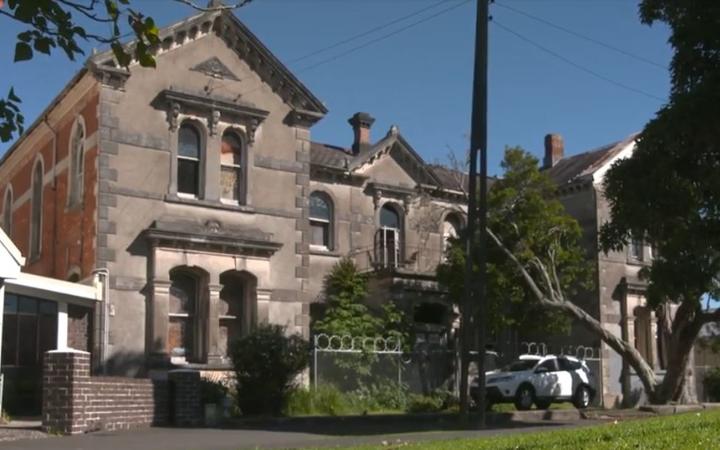 The Carlile House in Grey Lynn is decaying. Photo: RNZ

The council's Heritage Advisory Panel yesterday reiterated Auckland Council's desire to buy the derelict Carlile House in Grey Lynn, but the church that owns it says it doesn't want to sell.

The former orphanage, which has sparked many an Auckland urban legend over the years, has been classified as historically significant by both Heritage New Zealand and the council, yet it remains uninhabited as it falls to ruin.

It continues to decay because the church that owns it can't afford what would be an astronomical renovation bill.

Malakai Koloamatangi from the United Church of Tonga says they'd like to see the building retained and redeveloped, but it needed the council to step in.

"If the building can be kept in some way and redeveloped, then certainly that's what the church wants."

He said church members weren't prepared to sell the building to the council outright, although they'd be happy to work with them to redevelop it.

However, it's not going to be cheap.

"The estimate is around maybe between $10 and $20 million. The church understands that the house could be redesigned and redeveloped, not only for the use of the church but also for the use of others."

According to Heritage New Zealand, Carlile House was a purpose-built training centre and home for boys, who were primed to get into apprenticeships and trades.

The two-storey building was an orphanage for two decades from 1908 and has also been used as a remand home, an alternative school and a residence for recently-arrived Tongan migrants.

At the Heritage Advisory Panel meeting last night, members reaffirmed the council's commitment to purchasing the building and the council's heritage manager, Noel Reardon, expressed his optimism - despite being told by the church it's not on the cards.

"The church have been reluctant to sell and prefer options around re-development and in fact I received an email confirming that - that they do not wish to sell, that they do wish to look at redevelopment options, but I am forever hopeful."

"The thing that puzzles me is that the church appear to have practically abandoned the building for about 20 years. To someone not very familiar with the background, it's a bit puzzling why they don't want to sell it," he said.

"It must be worth a lot of money and they could use to use that money to build a church rather than have a decaying building on their hands."

The advisory panel recommended that the council confirms its support for acquiring the Carlile House to secure its "outstanding" heritage values.

"I love it, but I love old buildings. I think it's got lots of atmosphere and it's a bit of a waste to be sitting there doing nothing," Dannyelle Goodwin said.

"Basically it's an inner-city slum. But it has got a key bit of local history. And it's still a robust, good aesthetic presence on the street. It just needs, I'd say, $3 or $4 million spent on it," John Reynolds said.

"It would be a mistake to knock it down because it would give tacit approval that if a building is heritage-listed, by neglecting it, you can get it to the stage where you [if] if you neglect it so much then you have to get rid of it," another local said.

"It's our local ruin. I'm very fond of it," Barbara Grace said.

The Heritage Advisory Panel's recommendations will be sent to the council's Governance Committee for consideration.