Junior doctors have sent a clear message to Health Minister David Clark: "he needs to control his DHBs". 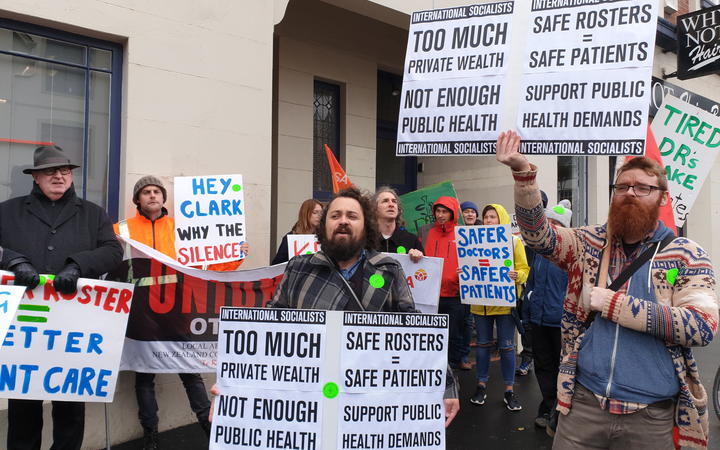 About two dozen people have picketed outside Dr Clark's Dunedin office today as part of the ongoing standoff over the collective agreement between DHBs and the union representing junior doctors.

Health Minister David Clark is not expected to meet with the protesters and left a letter on his office door.

"It is disappointing [the strike] is still going ahead when facilitation is scheduled for early May," the letter said.

"I urge both [parties] to put all their efforts into finding agreement through facilitation.

"Please note today I am in Wellington as it is a parliamentary sitting day."

The nationwide strike by the Resident Doctors' Association is expected to last five days.

Association executive member and paediatric registrar at Dunedin Hospital, James Anderson, said Dr Clark needed to recognise the standoff was his business and he had a role to play in resolving it.

"We've been bargaining with the district health boards for the last 12 months trying to get to a point where we can settle our agreement, our MECA, and we're not getting to that point. The DHBs are insisting on taking away protections in our contract and taking away our rights to come to agreement about how we work, where we work and when we work. And we can't get to a point where they will agree with us and we need the Health Minister to become involved.

"He's said up until this point that it's none of his business, and so what we are trying to do now is tell him today: this is his business. He needs to control his DHBs.

"We are the doctors trying to provide care to the people of New Zealand, we want to look after patients, we don't want to be standing in the rain in Dunedin outside his office when he's not listening to us. We want to go back to hospital, we want to work."

Mr Anderson said junior doctors across the country were under strain with long and difficult working hours and conditions, but that was an accepted part of the job.

"What we don't want is for our existing protections and existing safety to be taken away."

The small but vocal crowd was in good heart despite bitterly cold and wet conditions in Dunedin today.

The group chanted slogans such as "When doctors' rights are under attack, stand up, fight back".