The Waikato Regional Council is searching for the source of a huge discharge of foam pouring into the Waikato River. 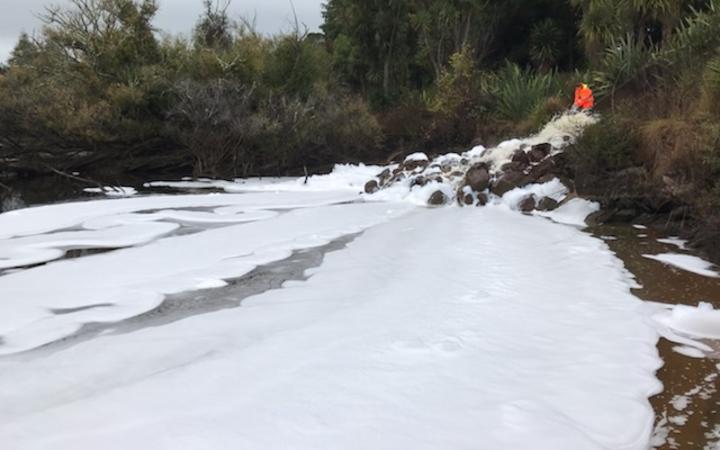 Samples of the discharge being collected by Waikato Regional Council staff at the culvert on the Waikato River at St Andrews. Photo: Supplied

The council was notified at 11am today after several members of the public reported a foamy substance coming from a stormwater pipe at the northern end of the golf course in Saint Andrews.

A Waikato Regional Council spokesperson, Wendy Valois, said the discharge appeared to be detergent-based but investigations were under way to establish its source.

She is warning affected residents to be cautious when drinking the water.

"If they are immediately downstream of the site and they can see the foamy substance then we would probably urge them to err on the side of caution and to hold off on taking any water until we have been able to confirm what the substance is," she said.

She said the Waikato Regional Council is working with the Hamilton City Council to trace back the stormwater system and investigate where the substance came from.

"We have so far been able to determine that it does go back to the Te Rapa industrial area," she said.

Results were expected on Monday afternoon.

"As a council we are very concerned of any discharge of this kind that goes into the awa," Ms Valois said.

"And so we are carrying out an investigation to establish what the source is."

She is urging anyone with information on the substance to get in contact the Waikato Regional Council on 0800 800 401.