A charity in Auckland which redistributes unwanted food hasn't collected any feijoa this year because the fruit is so badly affected by the guava moth. 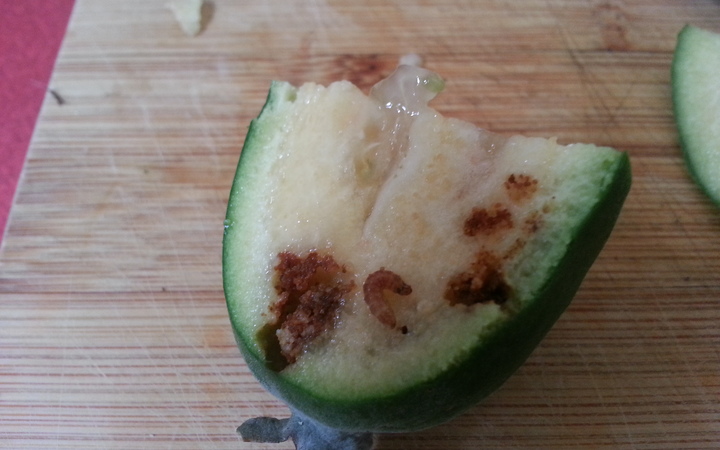 Community Fruit Harvest has not been offered any feijoas this year. Photo: RNZ / Joanna MacKenzie

The moth lays its eggs on a feijoa, and once the larvae hatches it drills into the flesh, spoiling the fruit.

The pest first arrived in New Zealand more than 20 years ago in Northland and has gradually spread down through Auckland to Waikato and the Coromandel.

Community Fruit Harvest is a charity that collects fruit and vegetables for foodbanks, community centres and soup kitchens and also makes chutney from donated fruit.

Its founder, Di Celliers, said this year there had been no offers of feijoa for volunteers to collect.

"It's tended to get worse for the past three years, and this year, we've literally had no offers of feijoas from people's backyards.

"When people offer fruit we also ask first if it is infected and we definitely don't pick any infected fruit because we don't want to spread it," she said.

Ms Celliers said the worrying thing was that the moth was not picky about its host fruit.

"Through the citrus season we noticed it had started getting into a lot of people's citrus trees, lemons, mandarins and limes as well.

"And then over the summer we noticed that it had got into people's plum trees," she said.

Ms Celliers said people had also posted on the charity's Facebook page that the moth had spread to other fruit like peaches and macadamia nuts.

She said something needed to be done urgently to try to stop the spread of the pest. "I didn't realise until last season that it was spreading to other fruit.

"I'm just surprised there hasn't been a more coordinated attempt by the government or some sort of government body or council body to try to stop this," she said.

Auckland Council has issued advice on its web page with more information about the guava moth.