Muslim leaders are working with police to increase security measures at mosques during Ramadan next month. 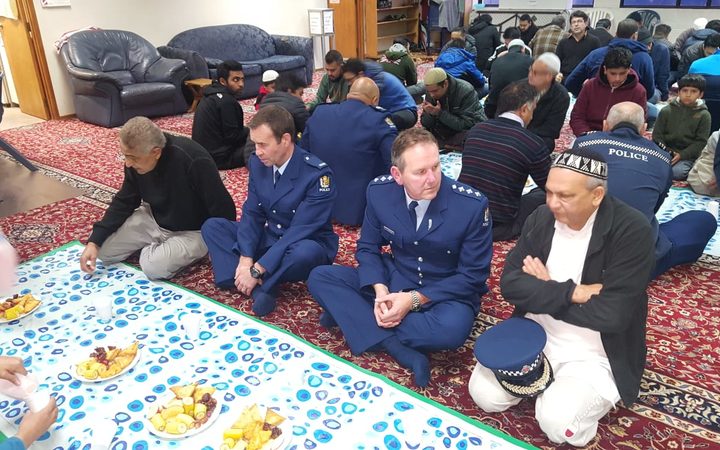 Officers joined Muslims for Iftar at mosques last year and security will be increased this year. Photo: Supplied/NZMA

Federation of Islamic Associations president Mustafa Farouk wants to make sure members are safe during Ramadan, which will begin in the first week of May.

Dr Farouk said mosques around the country were considering their own security measures during Ramadan and police support during the month-long observation.

"We have appointed a Muslim who serves in the New Zealand army to help us coordinate our own security throughout our own mosques throughout the country," Dr Farouk said.

Police said they had no information to suggest there was any specific risk to public safety, however their increased presence would continue around the country at churches, synagogues, and mosques deemed 'risk sites' and at major events.

No specific deployment or security information could be shared for operational reasons.

In accordance with the increased security measures, Dr Farouk said mosques around the country would no longer be able to welcome members of the public into their centres for the breaking of the fast, as originally planned.

More than ten mosques have had to cancel an open day event originally scheduled for today.

"We are trying to find out how we can express our thanks to New Zealanders, but because of security reasons, we are unable to bring people into our own facilities now," he said.

The event was cancelled because it would have been "taxing" on police resources after a busy holiday period.

"At a later date, we would like to do that ... to continue this aroha and this togetherness so that we can improve on that going forward."

A nationwide open day of mosques in the federation is likely to take place in June, after Ramadan.

In the wake of the mosque attacks, Christchurch activists are organising a day of action against racism.

The activists are planning a rally and march in mid-May.

One of the organisers, Tom Roud, said unless action was taken, there was a risk of racism and far right extremism taking root in New Zealand.