The Wellington City Council says it has run out of patience with a building owner who has not strengthened a central city building, six years after the deadline for the work to be done. 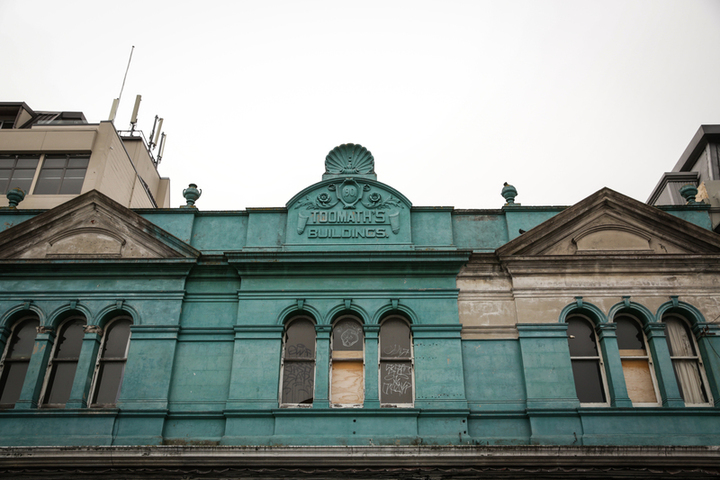 The quake-prone Toomath's Building in Ghuznee Street has had a red sticker for many years. Photo: RNZ / Rebekah Parsons-King

The council yesterday put up fencing and cones next to the Toomath's Building on Ghuznee Street, stretching across the footpath and car parks.

The deadline for the historical building to be fixed was in 2013, the council's chief resilience officer Mike Mendonca said.

Safety measures have been installed alongside 43 Ghuznee Street as it has been issued an Earthquake-Prone notice and entry has been restricted.
A number of car parks have been temporarily closed to allow pedestrians to safely pass the cordoned off site.https://t.co/NlnYw8CFZl pic.twitter.com/ra7d9tRrT6

The council had been in regular contact with the building owner, and had requested more information. There were further steps the council could take, but Mr Mendonca could not say what they were.

He said the owner had had enough time to secure the building, and strengthen it, but it hadn't happened.

"We've run out patience and decided to take action to ensure that the building is made less vulnerable to a seismic event in Wellington."

There were several stages, and the first was to secure the public space outside the building.

Shipping containers would be put next to the building so people could walk through them.

The council had written to the owner and requested information, and the council had regulatory tools it could use, Mr Mendonca said.

There were several buildings in the city in a similar situation in respect to their notice - but there was only one other that was a risk.

The others were either yet to send through their paperwork, or had started work to strengthen the buildings.

He said there were consequences for people who did not respond to notices the council had issued.