First person - I'm looking out at the scene of one of the worst chapters in human history. One hundred years ago, millions of people from around the world came to this small patch of land in southern Belgium to bomb, gas, shoot and stab each other for four years. More than 4600 New Zealanders were killed here and it is the site of the worst loss of life in one day in the country's history. And yet looking out onto the rolling green fields of Ypres and Passchendaele on a warm spring afternoon it feels like the most peaceful place in the world. 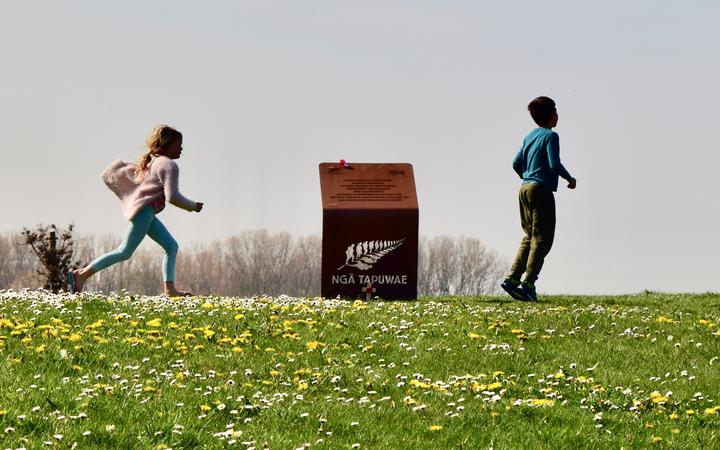 Two children play among the daisies next to a plaque for New Zealand soldiers in Passchendaele. Photo: George Driver

I went to the fields of Flanders last week to try and understand what occurred there, to see where the horror happened.

I started to get some answers on the train to Ypres. After nearly two hours of travelling through dead-flat landscape from Antwerp, suddenly I began to see subtle undulations and ridgelines - something to hide behind. For the Germans, this was one of the last defendable positions near the Belgian coastline. If the allies were able to drive them back from here it could help end the war. Conversely, if the Germans held the area, they could retain access to Belgium's ports and its fleet of submarines could continue sinking thousands of British ships, also potentially ending the war. It lead to a deadly stalemate that would last almost the entire conflict.

I was picked up from Ypres train station by Freddy Declerck, a Belgian who has spent more than a decade trying to help people understand what the Anzacs did here. His latest project has been getting a new monument installed in Passchendaele Memorial Park in Zonnebeke, an 8m tall Māori carving, that was to be erected that morning. 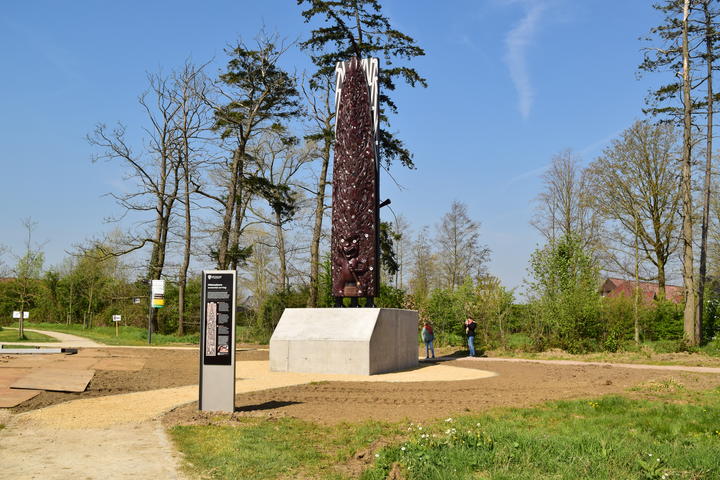 On the drive, Mr Declerck pointed out German bunkers, frontlines and battle sites, but within five minutes we were in Zonnebeke - the small scale of the area where so many lives were lost was shocking.

Zonnebeke is directly between Ypres and Passchendaele, the middle of the battlefield, and the town was completely destroyed. But it was hard to reconcile the history with the idyllic scene I found. The memorial park was a verdant green field surrounded by trees bright with new spring growth. I walked through the adjacent Passchendaele Memorial Gardens, which includes a flax garden dedicated to New Zealand's role in the war. Someone was mowing the lawns nearby and a woman was out jogging. It all seemed surreal.

Nearby, people were fishing and bathing in the sun beside a large pond bordered by trees in blossom. One hundred years ago there was nothing left here. Every building, every tree had been levelled - Mr Declerck said the pond was the only pre-WWI feature in the town.

I expected to feel the horror and the grief of this WWI battlezone but instead I felt baffled. How could this possibly be the shell-pocked wasteland I had seen in photos? The battlefields felt as distant as the moon. But why should this place be forever stuck in the shadow of WWI? Maybe this peaceful scene was the perfect memorial to the four years of slaughter. 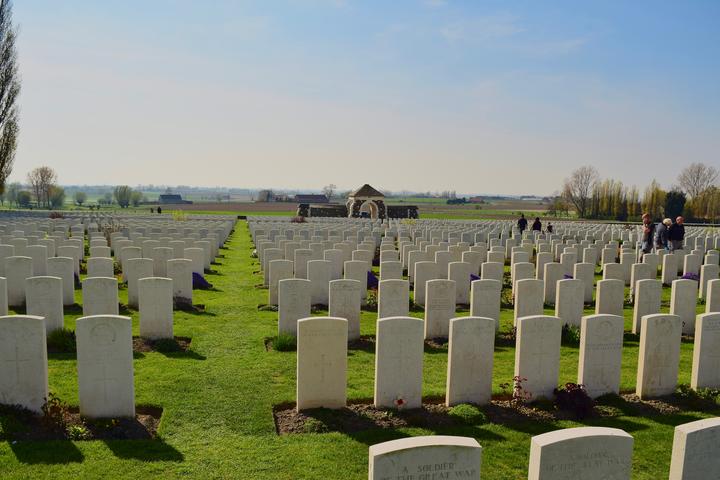 Five hundred and twenty New Zealanders are buried in Tyne Cot Cemetery, 322 of whom are unidentified. Photo: George Driver

A network of walking trails lead from Zonnebeke towards further battle sites, memorials and cemeteries that punctuate the rolling rural landscape. I walked towards Tyne Cot Cemetery, the largest Commonwealth war cemetery in the world, about 2km distant.

The path there traced the advance of the Australian Anzac troops on October 4, 1917, during the Battle of Broodseinde. I walked across the former frontlines, now lush farmland where cattle grazed beside the remains of a German bunker. Groups of children cycled past on their way home from school and I again tried to transcend the 100 year gulf between the two worlds.

The cemetery, between Zonnebeke and Passchendaele, started as a battlefield gravesite. It now contains almost 12,000 Commonwealth graves, including 520 New Zealanders, 322 of whom are unidentified. Walking through the white stone arches I immediately came to an apse with the names of 1166 New Zealanders who were killed in the battles of Broodseinde and Passchendaele and whose gravesite remain unknown. I stood for several minutes, taking in the immense wall of words, recognising the surnames of people I've known.

I walked through the rows of headstones, spying the graves of Kiwi soldiers - a New Zealand corporal "Known Unto God", an unknown soldier of the Otago regiment - marked by a silver fern engraved into limestone. From the slight slope of the cemetery I could see the cathedral tower of Ypres, just over 8km away. An unexpectedly beautiful view over an area where about a million people were killed or wounded.

On a grassy bank outside the cemetery a couple of children played amongst daisies beside a small rusty iron plaque. Beneath a stylised silver fern, with marching soldiers in place of the fronds, was written "Ngā Tapuwae" - footsteps. From here I decided to follow the Anzacs and walk through the site of New Zealand's worst day in military history - October 12, 1917, when 843 New Zealanders were killed in a single morning - just a couple of kilometres away. 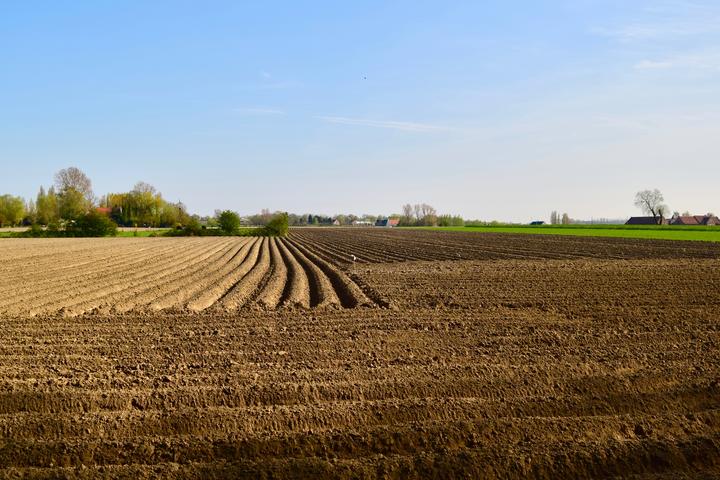 One hundred years on, the battlefields of Flanders seem a world away from the muddy shell-pocked landscape of WWI. Photo: George Driver

While walking along a small farm lane I came across a rusty artillery shell sitting in the grass on the roadside. Looking at my map I realised this was Berlin Wood. This was it. This was where the New Zealand troops launched the disastrous offensive. Did a German fire that shell at the Anzacs? WWI seemed to be creeping closer - I felt shivers.

Farmers in Flanders still find thousands of unexploded bombs each year which emerge when the fields are ploughed. Sometimes they explode and people are still killed and disfigured. The farmers put the bombs out at the roadside to be collected and destroyed by bomb disposal teams - about 150 tonnes of explosives are collected each year.

I walked along the former Anzac front line and looked out towards Bellevue Spur, the first objective of the soldiers on October 12. The ridge was only about 800m away, a slight rise on the way to Passchendaele - I could see the church tower of the town 2.5km away, but it seemed just across the field. It would take nearly a month for the allies to get there with around 85,000 people killed or wounded, only for the town to be reclaimed by the Germans a few months later. In total, there were nearly a million casualties in the Battle of Passchendaele (July 31 to November 10, 1917).

A New Zealand flag was flying in the car park of an old cheese factory nearby and an information board showed a map of the Anzacs advance through the farmland before me. From this small plateau the New Zealand soldiers had to descend a gentle slope to Ravebeek stream and then go up a steady incline to Bellevue Spur. On this short descent the Anzacs were raked with machine gun fire and pounded by artillery. There was no cover. It had been raining for days and knee-deep mud, churned by shells, made it impossible to travel quickly. They were meant to walk before a creeping barrage of artillery fire, but the mud prevented two-thirds of the guns from reaching the front. Those that arrived slipped as they fired and shells fell short onto the Kiwis.

In a couple of minutes I had reached Ravebeek creek, where I found another artillery shell, ploughed up beside a farm. I looked across the churned earth, up to where German pillboxes must have been. 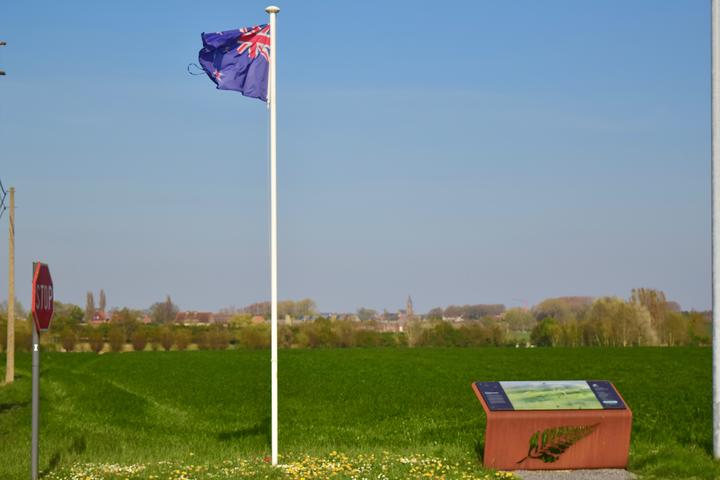 A New Zealand flag marks the frontline where Anzac soldiers advanced on October 12, 1917 - the church tower of Passchendaele is visible in the distance, just 2.5km away. Photo: George Driver

I soon came to the ridgeline and a small collection of farm houses called Wallemolen. This was where the Anzac attacked stopped, halted by uncut barbed wire and horrendous losses. At 8am, they dug into the mud - the attack had failed.

The sun was setting. No one else was around.

After standing for some time, transfixed by the place, a couple of farmers walked past on their way home from the fields of the Anzac battleground. Smiles on their faces, they asked me in Flemish what I was doing, walking beside a road seemingly in the middle of nowhere. "Ik ben een New Zealander," I said, in my rudimentary Flemish. The man took my hand in his huge palm and shook it eagerly. Between broken Flemish and English I tried to explain that nearly 1000 Kiwis died here 102 years ago. The farmers didn't know about the battle, or the role of the Anzacs here - it was another day in four years of war that took place a century ago on the land they grew up on. But I felt a deep warmth from the meeting. Walking away, tears welled in my my eyes. I can't really explain why - we only exchanged a handful of words. But it felt like an echo from the past, from a shell-pocked hell hole to a pleasant spring evening. Our two countries a world apart, intertwined by the blood, mud and iron of WWI, now at peace.

Somehow I knew I understood something about the war - not with my head but with my heart.

As the sun set, I headed back towards Zonnebeke, stopping off at a New Zealand memorial in 's Graventafel, which literally translates to 'table of graves'. A large limestone tower marked a ridge successfully captured by the Anzacs on October 4, 1917. On its base was inscribed, "From the uttermost ends of the Earth - Van de uiterste einden der aarde".

A few minutes later, among the rich soil of a ploughed field near Tyne Cot, I found a piece of shrapnel about the size of my hand - a fragment of a bomb fired 100 years ago. A momento from a day I'll always remember, and of a part of New Zealand's history I'll never forget.