Forty young women from around the country got a taste of Air Force life at Woodbourne Base, near Blenheim, this week. 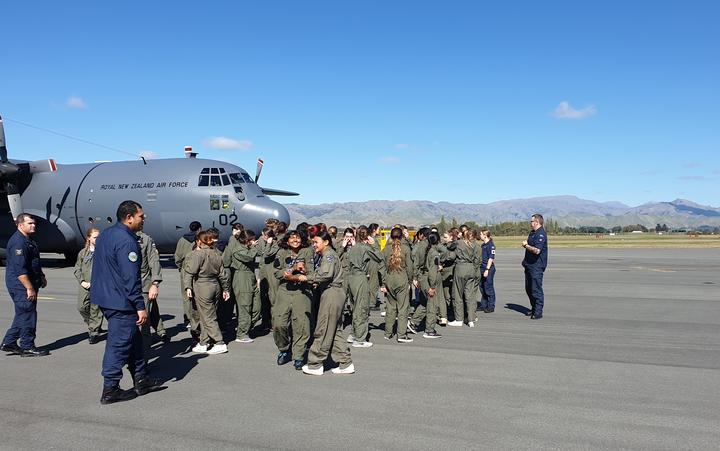 The year 13 high school students were taking part in the School to Skies programme, which is in its third year.

Underlying the course is the need to recruit more women into the military.

Yesterday the students were on board a C-130 Hercules for a mock search and rescue mission.

The students gathered near the tarmac.

They had a busy week with practical theory and hands on plane experience.

Now it's time for take off.

It's a chance for the students to find out what it's like flying in a military plane and to see inside the cockpit.

Danika Holland, from the Far North, has wanted to be in the Air Force from a young age.

"Aviation yeah, I'm interested in it - it's really cool - but even just being here for the week it's getting a chance to see all the other different trades as well, it's so cool to see all the different opportunities and different career paths," she said.

Sarah Poulter from Auckland loves maths and science and is impressed with the military.

"I think it's a really amazing opportunity to develop as a real well-rounded person, they give you so many career opportunities, but also a whole lot of personal development... I think it's breaking down a lot of the boundaries between girls and the Air Force," she said.

For Amaaria Bhana from South Auckland it's about having a go and meeting new people.

"What attracted me was that it was for Year 13 girls ... and so I was like, oh yeah why not just go for it - have a go - get some experience in the Air Force," she said.

Squadron leader George Magdalinos said at the moment women make up just under 20 percent of the Air Force and the aim is to get to 25 percent by 2025.

"I don't worry about harassment or bullying or anything like that ... what I worry about is when you've got numbers as low as we do in some of those more STEM orientated - more traditionally masculine trades - I worry about the isolationism, and the fact that you could be the only one of your kind in amongst many, many others ... so that can be quite daunting," she said.

And the success rate of turning a week on base into a job was high.

"At the moment we have one of our graduates on initial officer training - having been accepted as a pilot - and we have another young lady or young graduate on recruit course at the moment training to be an aircraft technician.

"We have another six or seven offers of service that's jobs being dished out, thus far, and we've got another approximately 20 in the recruiting pipeline," said squadron leader Magdalinos.

For many of this week's students - a career in the Air Force was one step closer.