Residents say they are sad to see the iconic signpost at the Panmure roundabout in Auckland be removed this weekend. 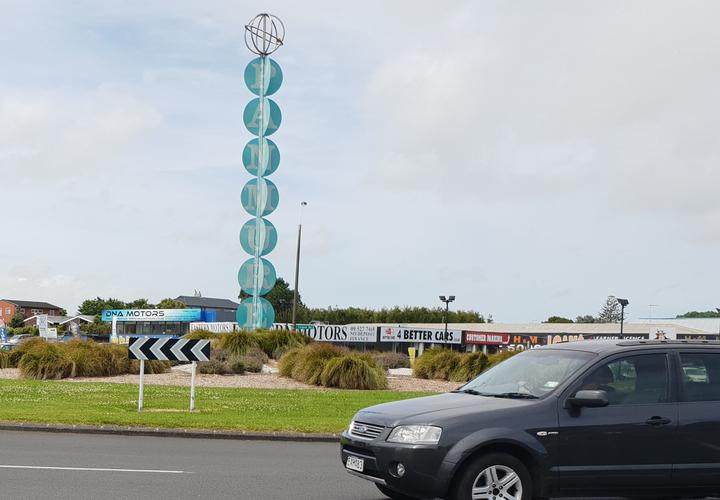 The space-travel themed post - which has been in the west end of the suburb since 1994 - stands tall at 12m and bears the suburb's name on seven turquoise-coloured discs.

It is being removed to enable the construction of a signalised intersection as part of the $1.4 billion AMETI (Auckland Manukau Eastern Transport Initiative) Eastern Busway project.

Nerissa Henry of the Maungakiekie-Tāmaki Local Board said about 100 people flocked to Panmure last Sunday to take their last photos with the post.

She said she had known the signpost her whole life and was sad about its removal.

"I'm hoping that we find a feasible place for it to go somewhere else within the outskirts of the Panmure town centre, so it still can be a gateway signage but we understand that it has to be relocated somewhere else," Ms Henry said.

A post on social media encouraging people to take a last photo has drawn hundreds of comments and shares.

One person doubted whether they were going to find their way home "once the big sign is gone", and another believed it was "destroying history".

AMETI programme director Duncan Humphrey said the signpost would be stored in a council facility after being taken down and the public would be consulted regarding its future.

He said the busway was the first connection for east Auckland to Auckland Transport's strategic public transport network, which would see journey times between Botany and Britomart by public transport cut by a third.

"The main benefits are increasing economic growth, regeneration of the area, and much faster and more reliable travel choice. You can get from Botany to Britomart in less than 40 minutes," Mr Humphrey said.

The busway project was opened on Friday, which was Auckland's second largest transport project after City Rail Link.

History of the signpost

The installation of the Panmure sign was part of a streetscape upgrade in the 1990s and it was designed to reflect the growth of the Panmure township between the late 1940s and the 1960s, according to the Panmure Community Magazine.

"A 1950s theme of space exploration, atomic energy and new thinking towards technology was chosen," it said.

The sign was painted a turquoise blue initially to coordinate with the street furniture throughout the town at that time, and was repainted with a wasabi green about 10 years ago, which started to peel in places, the magazine said.