One month on from the terrorist attacks on two mosques in Christchurch, many people are still struggling to come to terms with what happened.

The attacks left dozens widowed, more injured, and the country in a state of shock.

As people begin to rebuild their lives, they say it will be a long time before their lives resemble anything close to normality.

Hisham al Zarzour is still having trouble sleeping and eating.

He and his wife and their three children came to Christchurch as refugees from Syria seven months before the attack.

At their home in the suburb of Spreydon, the children's drawings decorate one of the lounge walls, amongst them a "welcome home" message written for Mr al Zarzour when he returned after 17 days in hospital. 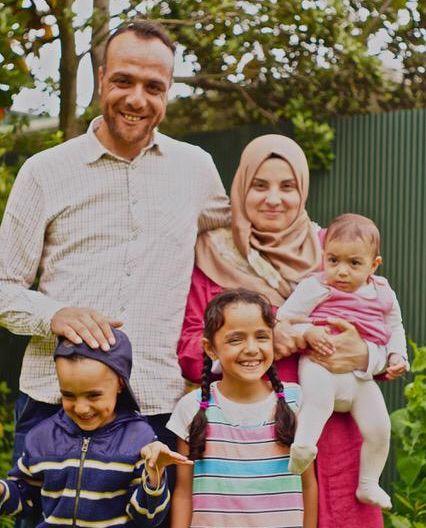 He was shot in the leg and survived by being underneath other people during the shooting.

Mr al-Zarzour and another friend were early at the mosque the day of the shooting, even though usually they were late.

He said it was a normal Friday, and after being at the mosque they were planning to go home and drink coffee. His friend did not survive.

He said for the first three days after he got home, he was unable to eat and sleep, and was still having trouble doing either.

"Sometimes, when I close my eyes, I hear the bullets, I hear the people. I was talking to them five minutes before [the attack] and then I was with them in that position.

Mr al-Zarzour said he survived because he was at the bottom of a pile of other people.

He also suffered a heart attack in hospital.

Mr al-Zarzour will not be able to work for another six months because of his injuries, but will go back to the mosque.

"We must go, we must continue our life. What happened will effect our life, and it will not be easy to forget what happened, but we need to try."

He said the way the government had responded to the terror attack had helped - lessening the sadness and anger following the attacks, and giving hope.

But it had been confusing figuring out what extra financial assistance he and his family was eligible for, and how to get it.

Across town from Spreydon, at a University of Canterbury cafe, Aymen Jaballah holds out his phone. The screen shows the people he calls most often, and still listed is the name Atta Elayyan, who was killed in the Al Noor Mosque.

He had been heavily involved in the community, which meant he knew many people quite well who were killed.

Mr Jaballah was in the Al Noor Mosque and said even at the time, when people were injured around him, he did not believe what was happening.

He said his initial response was probably similar to that of most people in New Zealand.

"Absolute confusion, absolute denial, and chaos, and then it just went down to the typical symptoms of grief, which is denial, anger, frustration, guilt."

He said there were professionals that could help and he had been to a counsellor himself.

He was still trying to ease back into normal life and was expecting to go back to work for the first time since the attack today.

Mr Jaballah said for many, even a month on, the full impact of what happened probably had not sunk in.

"Someone put it really well when he said, 'It will only sink in when all the people coming and visiting stop'. So that vacuum will be created, and that's when the emotions have to be sucked out."

But on the other hand, it was possible the enormity of what had happened might never really sink in.

In the days after the attack, hundreds of bouquets of flowers were placed next to the entrance of the Christchurch botanic gardens alongside messages of sorrow, sympathy, and love.

Over the weekend people were still coming to pay their respects, and said they were still shocked by what had happened.

Tanya Tunnicliffe said she lived nearby and was still shaken by what had happened.

She had been at the climate change march with her daughter and was glad to have her with her at the time.

Despite the tragedy, there were many beautiful things that had happened afterwards.

"There was a lot of love that poured out on the Love March afterwards. Sometimes I can forget about it and then I think, 'Oh my gosh, I still can't believe what happened here.' "

She and her friends had taken in and been looking after a woman who lost a son in the shooting.

Kate and Blair Clarkson said they also felt like it was still sinking in.

"I can't believe something that you always think of as happening overseas has happened here," Mrs Clarkson said.

"It's been a really tough time for all the people in our community."

The high terror alert, imposed on the country for the first time right after the shootings, is still in place.

Victim Support said it had paid out $1.7 million to victims of the attack - $1.4m comes from the $10m donated to the organisation via Givealittle, and $249,000 from the Ministry of Justice.

Immigration NZ said 237 visitor visas had been granted to family members of the victims, and the organisation was committed to easing any worries people might have about their immigration status.

The government was considering possible options for people on temporary visas who had been affected.