The jury has seen footage from a covert camera found in a toilet at the New Zealand Embassy in the US, in the trial of top military attache. 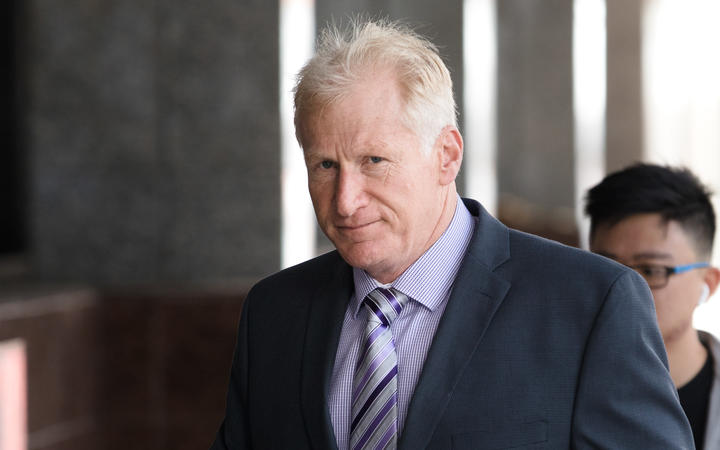 Alfred Harold Keating, 59, has pleaded not guilty to charges of attempting to make an intimate visual recording, in his trial at Auckland District Court this month.

He is accused of planting a covert camera found in a unisex bathroom in the New Zealand Embassy in Washington DC in July 2017.

A number of videos captured on 27 July were played to the jury this afternoon, the first being a video of the covert camera being set up.

In it, an unidentified person wearing a pair of blue latex gloves places the motion-activated camera in the heater just after 9am US time.

The blue gloves engulf the screen during the start of the video as the camera is placed between the heater's panel and the wall, with a full shot of the bathroom's toilet.

A piece of paper towel is brought into shot and then removed before the brief recording cuts out.

The second recording captures a man using the toilet just 47 seconds later and continues recording several minutes after he moves out of shot.

Detective Sergeant Paul Stenzel analysed the videos and told the jury it appeared the covert camera would begin recording when it detected movement and was set up to record video for a maximum of 20 minutes at a time.

He said partway through the series of videos the camera's shot had changed, indicating the device had fallen from its original mounted position.

Mr Stenzel said shortly afterwards the camera fell all the way to the floor of the bathroom and then proceeded to capture people's feet as they came and went.

The 15th and 16th videos showed embassy driver Jerry Navarro entering the bathroom and picking up the device before putting it on top of the heater, he said.

In giving evidence on Tuesday, Mr Navarro told the court he had no idea what it was and did not feel concerned about the finding at the time.

It was only when Stephen Warren, an embassy staffer working for the defence force, spotted the device on the floor that the alarm was raised.

Mr Keating, a former commodore in the New Zealand Navy, held diplomatic immunity at the time the camera was discovered but could still be prosecuted by the New Zealand police.

He was on a specialised visa at the time of the discovery.

The 59-year-old has categorically denied the allegations. His lawyer Ron Mansfield compared the Crown's case to a celebrity magazine in a waiting room with stories that he said did not live up to its racy headlines.

The trial before Judge Robert Ronayne and a jury of 10 women and two men is set down for two weeks, ending 19 April.