The jury in the trial of a top defence force official has heard from the man who discovered a secret camera at New Zealand's embassy in the United States. 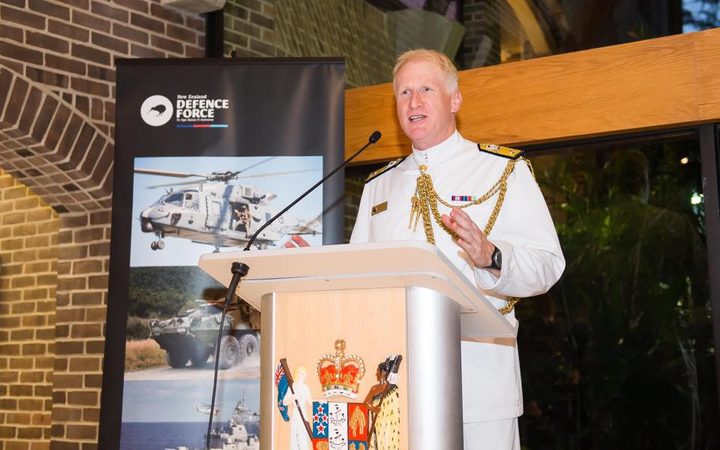 Alfred Harold Keating, 59, is on trial in the Auckland District Court after pleading not guilty to a single charge of attempting to make an intimate visual recording.

Mr Keating, a former Commodore in the New Zealand Navy, was serving as the Senior Defence Force Attache in Washington DC in July 2017, when a secret camera was found in a unisex bathroom.

This morning Jerry Navarro, a driver at embassy, gave evidence via AVL from the United States' capital.

He told the court he made his way to the bathroom on the afternoon in question, intent on brushing his teeth as he did at lunchtime everyday.

He saw a small plastic device tucked under a heater on the wall, he said.

Mr Navarro told the court he picked it up with two fingers, inspected it, and placed it on top the heater, thinking somebody had left it in the bathroom and would soon return to find it.

This morning several brief videos taken on the covert camera were shown to the jury.

The recording begins upside down, with a grainy shot of the base of the toilet bowl.

A shadow flickers in the shot, indicating someone has entered the small bathroom, and then a pair of dress shoes enter the frame.

The video jerks around as the device is picked up by Mr Navarro and it shows a stainless steel watch on his wrist and part of his face.

The video ends with a close up shot of the vents on top of the heater, after the driver had placed the camera on top of the radiator.

This morning Mr Navarro told the jury he had no idea what it was and did not feel concerned about the finding at the time.

Although Mr Navarro was the first to see the covert camera, it was Stephen Warren, an embassy staffer working for the defence force, who raised the alarm.

He went to the bathroom after Mr Navarro and described seeing the little black box on the heater.

"It was a black box, probably about an inch, an inch and a half thick and three or four inches long. It appeared to be what I thought was a hard drive."

Mr Warren said he had a gut feeling the little black box was more than just a hard drive and picked it up for a better look.

"I picked up the black box, which was on top of the radiator, and held it in my hand. I spun it around and notice some small holes and what appeared to be a lens of some type."

Mr Warren said he kept a grasp on the camera and put it in his pocket before going to his trusted colleague, Daniel Vruink, who had a higher security clearance than him.

CCTV footage played to the jury shows the pair walked outside the front of the embassy and Mr Warren revealing the camera.

Mr Vruink told the court he briefly inspected the device and, concluding it looked "dodgy", told his friend to report it to the Consul-General; sparking a police investigation.

In cross-examining Mr Warren today, his lawyer Ron Mansfield questioned why the official, who has a police background, handled the device if he thought it might be suspicious.

Mr Mansfield: "You would know that potentially the police, or the security at the embassy, might be interested in such a device?" Mr Mansfield asked.

Mr Warren: "I did not know what the device was. I thought it was a hard drive."

Mr Mansfield: "But even if it was a hard drive left behind that would create a security issue, wouldn't it?

Yesterday the court heard a staff member who used the bathroom after Mr Navarro realised it was a camera and raised the alarm.

The Crown case is that Mr Keating had earlier hidden the small, motion activated camera, wearing a pair of blue latex gloves.

Crown prosecutor Henry Steele told the jury a forensic examination of the device found DNA on the camera's memory card that matched that of the defendant.

However, the camera fell down shortly after being installed, so much of the footage was of people's feet.

Four months after the camera was discovered, the defendant's personal laptop was searched and police found several internet searches relating to the camera, he said.

In his opening address yesterday, Mr Mansfield compared the Crown's case to a celebrity magazine with stories that did not deliver on racy headlines.

The trial before Judge Robert Ronayne and a jury of 10 women and two men is set down for two weeks.