By Daniel Birchfield for the Otago Daily Times

A truck driver has captured footage of two instances of dangerous driving in the space of two weeks on State Highway 1 south of Oamaru.

Richard Collard, who has been driving trucks in New Zealand and Australia for 25 years, posted footage of the two incidents on 21 March and 2 April near Moeraki on his TruckCam NZ Facebook page recently.

Video captured on his dash cam of the first incident shows a white SUV overtaking Mr Collard's truck on a single yellow line on a sweeping right-hand bend before it attempts to pass another truck.

The driver pulls back into his lane only when another truck travelling in the opposite direction appears, narrowly avoiding a collision.

It can be seen turning right out of the Moeraki Boulders turn-off in a northbound direction in the wrong lane, before it passes a truck driving in the left lane and then pulls in ahead of it.

Mr Collard was shocked to see two dangerous manoeuvres on the same stretch of road in such a short space of time, and said the most recent incident was the most concerning.

"I was thinking 'I hope there's nothing coming the other way'. The other thing I was thinking was had he seen the truck and has he just tried to get in front of it, or is he an overseas tourist and just driven the wrong way?

"It was such a dangerous thing and a cavalier attitude. It was like they didn't notice they had done anything wrong."

He did not report the second incident to police as he was unable to identify the make, model or registration number of the vehicle.

However, he did report the first incident, which police were investigating. 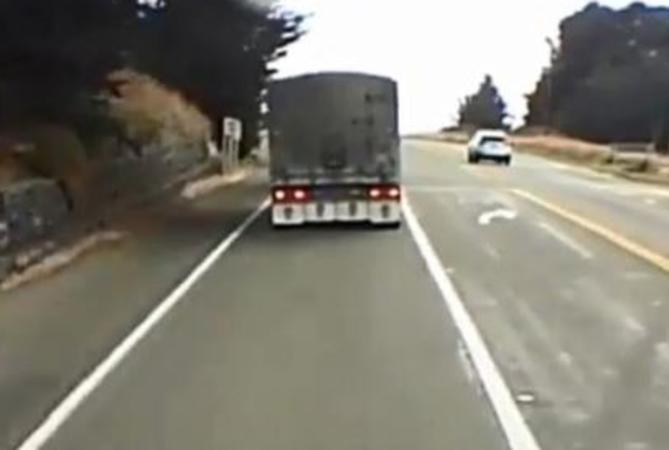 Dashcam footage of a vehicle turning out of the Moeraki Boulders turn-off in the wrong lane on 2 April. Photo: Richard Collard / Otago Daily Times

Mr Collard said he created the Facebook page to show the public what truck drivers encountered on a regular basis.

He advised drivers to be careful on the road, as many trucks were fitted with dash cams.

"Drivers need to be aware there are many, many trucks with cameras now. There's a very good chance you are going to get snapped and it might end up on Facebook or in the hands of police."