A new lobby group pushing for a capital gains tax is defending the spending of thousands of dollars on advertising to push its message. 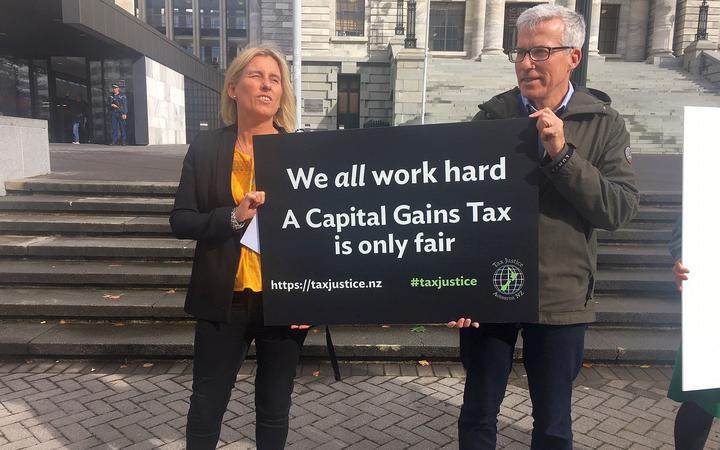 Tax Justice Aotearoa, a coalition of community and union groups, has spent $15,000 on ads in major newspapers, billboards and buses.

At its launch at Parliament today, about 15 members of Tax Justice Aotearoa gathered holding signs saying: "Fairness is the Kiwi way, it's time for a capital gains tax."

It's also calling for tax cuts for low to middle income-earners and hikes for the highest paid.

Spokesperson Paul Barber responded to questions from the Taxpayers Union about the source of the money used to pay for it.

"We've funded the campaign by chipping together our various skills and resources, and we've had a bit of support around communications work and that's all we've got at this stage."

Mr Barber from the Council of Christian Social Services earlier told RNZ the group's campaign had been largely supported by the Public Health Association.

The association's a registered charity which is partly funded through a contract with the Health Ministry, but also receives donations from the public. 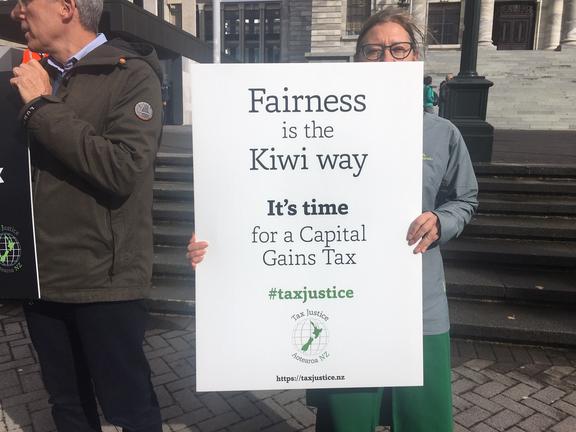 Jordan Williams from the Taxpayers Union said the Public Health Association should not be contributing.

"This is an important debate for New Zealanders and I think it's a shame that taxpayer-funded groups are trying to hijack it."

But Mr Barber said the ads were paid for from donations, and the Public Health Association only contributed by offering communications support.

He said that allowed the public to hear a view largely excluded from the tax debate so far.

"We've got the billboards running on the bus stops around town here, we've got newspaper ads running and it's about simply wanting to be a voice that is heard in the debate.

"The majority of people support a capital gains tax and that voice doesn't really seem to be being heard."

A capital gains tax on businesses, farms and second homes was among the recommendations of the Tax Working Group. 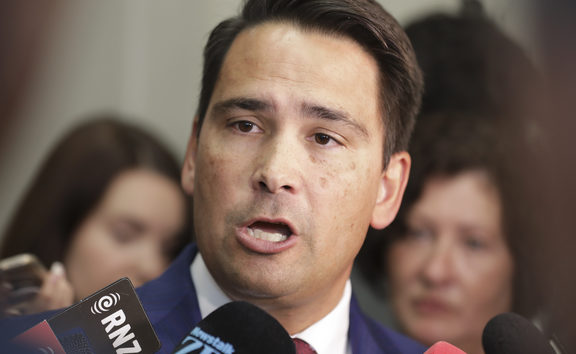 Rae Julian from the Equality Network said that would make the system fairer and provide money for essential services.

"The health system is in desperate need of extra funding, the education system, social welfare and we believe that only by getting a bigger tax take into the system, you can pour more into those areas."

He said as many as 570,000 businesses would be affected, including those at the grassroots.

"The Tax Working Group and indeed the prime minister would give the impression here that a capital gains tax really just applies to this other group, this very small group of the very wealthy and my point is that's not true.

The government's response to the Tax Working Group's recommendations is expected sometime later this month.